The owners of the Bronze Eagle Pub and BuckleDown Brewing are pleased with recent action by the Lyons Village Board that positively impacts them.

“I’m excited about it,” Riggio said on July 8. “This is something I’ve wanted to do for a while. We have a nice area in front (of the building).” 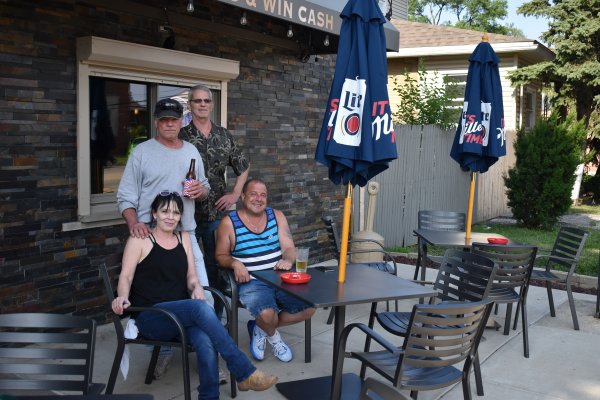 Patrons at Bronze Eagle Pub are thrilled the new beer garden has won approval from the Lyons Village Board. Photo by Steve Metsch.

Another business to immediately benefit from the action is BuckleDown Brewing, 8700 W. 47th St., which added an outdoor seating area during the coronavirus pandemic.

Ike Orcutt, who opened BuckleDown Brewing in 2013, said the beer garden opened about two weeks ago.

The beer garden “has been great for us,” Orcutt said.

“It’s important for people who want to go out and have some beers, to be able to spread out. It’s gone over really well,” he said.

Patrons there on July 8, including two sitting outdoors, said they like the beer garden.

“If they wanted to do a larger beer garden, they’d have to go with the enclose type of beer garden (with the six-foot fencing),” Mayor Christopher Getty said.

Bronze Eagle Pub and BuckleDown Brewing “have had a dry-run at this,” Getty said.

“Because of COVID, they’ve had outdoor operations that were permitted through the state and the village of Lyons,” Getty said.

“We’re allowing them to maintain these operations but they have to adhere to this square-foot requirement,” Getty said.

The village instructed Riggio to get signed affidavits from his neighbors to the west and east that they approve of the plan, Getty said. No opposition was heard. 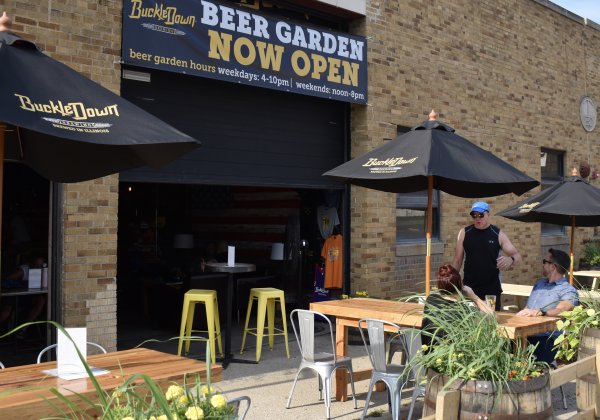 BuckleDown Brewing is in an industrial strip on the north side of 47thStreet and has an earlier closing time. Getty said anticipates no problems with no homes on either side.

Orcutt made good use of the lockdown caused by the pandemic by adding five beers, giving BuckleDown customers 15 to choose from.

“We did use that COVID shutdown,” Orcutt said Monday. “We made a bunch of improvements, we needed renovations to the tap room and we added five more draft lines, as well. After seven years, you want to keep it fresh.”