The late Charles “Moe” Gerny got a fitting send-off from the village he loved.

Gerny, a former commander of Emil Scheive American Legion Post 699, was honored with an outdoor ceremony in front of the Lyons Village Hall on July 9.

About 40 people attended the  service for Gerny, who died July 6  in the Hines VA Hospital in Maywood.

Gerny, 70, grew up in Lyons, served in the Army during the Vietnam War, and returned to Lyons where he joined the American Legion post, eventually serving as commander.

“Whether it’s his friendly embrace, big smile or distinctive look he’d give with a smirk, Moe is missed by his family, friends and our community,” Getty added. 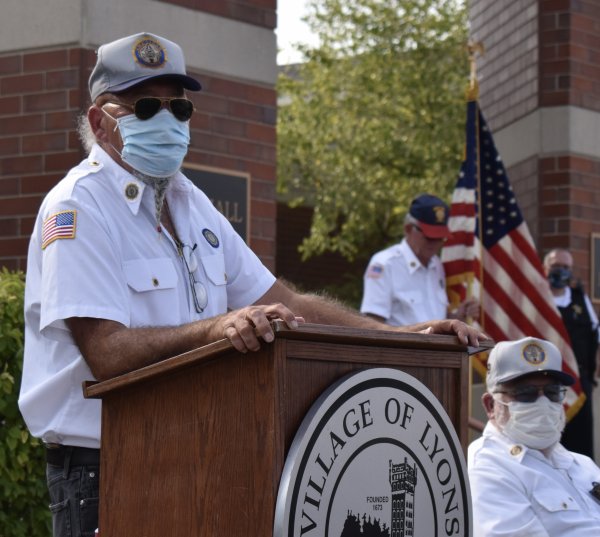 Getty said he worked with Gerny on various village events over the years.

“That’s when I got to know him as a person,” the mayor said. “He was always helpful, he was always responsive, he was always very sincere. He was all around a genuine, good man. We miss you, Moe.”

“Mo was raised here. We all got in trouble here. We all did our things here. It’s Lyons. You might leave Lyons, but your heart is still in Lyons. Moe’s heart has always been in Lyons,” Marsh said.

“The only way I can say thanks to somebody who has done so much to Emil Scheive Post 699 is to send him off in peace,” Marsh said. “I know he’s already causing havoc wherever he’s at.”

“I grew up across the street from him,” Marsh said. “I was in Vietnam in the Marine Corps and he was in the Army. We’d write letters (to each other).”

“I put the first hole in his head. I hit him with a turpentine can,” Marsh said.

“His brother and him were always bigger than me. So, I went racing up, I wanted to be the king of the mountain, so I hit him with turpentine can and put 10 stiches in his head. I was king for that day, then I got paid back by Moe,” Marsh said with a laugh.

Gerny lost a lung to cancer about 25 years ago, Marsh said.

“I saw him on the Fourth of July and he looked great,” Marsh said.