Masks, gloves, sanitizer given to each household

The village of McCook may be small, but it responded in a big way to the coronavirus pandemic.

On the evening of April 30, police officers and firefighters delivered masks, gloves and hand sanitizers to each of the 107 households in the village.

The brown paper bag is for storing the N-95 mask, DePasquale said. If not contaminated or soiled, the masks can be stored in the paper bag and used up to two weeks, he said.

Each household also received a $50 MasterCard gift card. Those were purchased by Carr using a portion of what had been the mayor’s salary.

Carr slashed the mayor’s salary $30,000 when he assumed the office last month, and he used part of that to buy the gift cards.

The gift cards can be redeemed to purchase more supplies, groceries, at takeout restaurants, or wherever the resident chooses, Carr said. 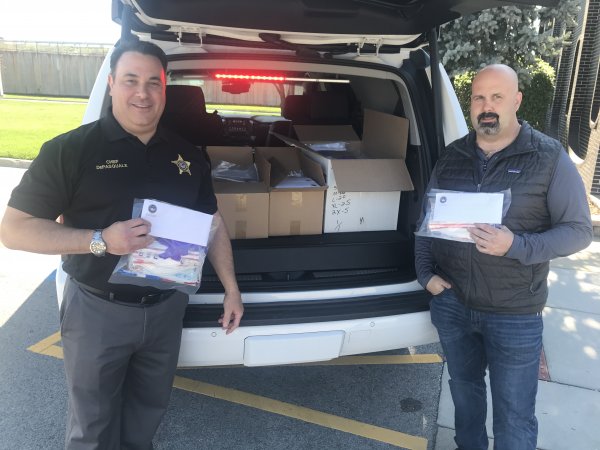 Supplies came from the police and fire departments.

“When the governor put the order out that we all had to wear masks (starting May 1), I asked the guys to get some stuff together,” Carr said.

“(I told them) whatever we’ve got to do to make it happen,” Carr said. “It went seamless.”

DePasquale said the police and fire departments had extra supplies that had been donated or purchased.

“We put together a care packages for residents,” DePasquale said. “There’s a letter in there from the mayor, explaining we’re all in this together and we’re going to help out as much as we can.”

Four teams of one police officer and one firefighter went door to door.

Gary R. Schweigert, who lives near the village hall, said it was “really nice” to receive the items.

“I have a couple masks here in the house,” Schweigert said. “I use them when I go over to the store, but it’s nice to have extras … Hand sanitizer, I don’t have any of that.”

A few doors up the block, Jaime Yuretich was smiling.

A block south on Egandale Avenue, across the street from the public library, firefighter Brad Carmody and police officer Kevin Justus visited the home of Kevin Russell.

“It’s good to give back,” Justus said. “I know a lot of people are struggling to find supplies, and the village has access to supplies.”

Carmody agreed: “It’s nice to be involved in the community.”

Police Lt. Rachel Huedepohl and Fire Chief Myrick stood at a nearby corner, making sure enough supplies were available to those visiting residences.

Myrick, 65, has been on the fire department for 46 years. He grew up in McCook, and pretty much knows everyone in the close-knit community.

“It’s great because any time we can help a resident, that mean everything,” Myrick said.

“I love helping the seniors because if we can do that to make their life simpler … People (who) don’t have access to get the gloves, (it’s good for them) to get the face masks.”

Myrick added that he cares about the residents’ safety and well-being “because life is too short.”

The Dome Restaurant is demolished News

90 and not slowing down News