Summit Mayor Sergio Rodriguez and other village officials, along with dozens of volunteers, were at the old boat launch site, 7800 Canal Bank Road, the morning of May 12 for a cleanup of the canal.

At the May 7 s village board meeting, Rodriguez invited residents to participate from 9 a.m. to noon in a cleanup led by Friends of the Chicago River.

The village is partnering with the National Park Service for a study on how to best resurrect the boat launch site, which has been closed for several years.

“They’ve been doing (cleanups) for years and have expanded it to other communities. This would be a great project to highlight what we’re trying to do,” Rodriguez said. “We’re excited … people coming in and lending a hand to keep it clean.”

The village is conducting a survey seeking community input and feedback for ideas on how to best develop a recreation area there.

The site currently is overgrown and gated, but Rodriguez envisions it eventually becoming a recreational facility for the village. 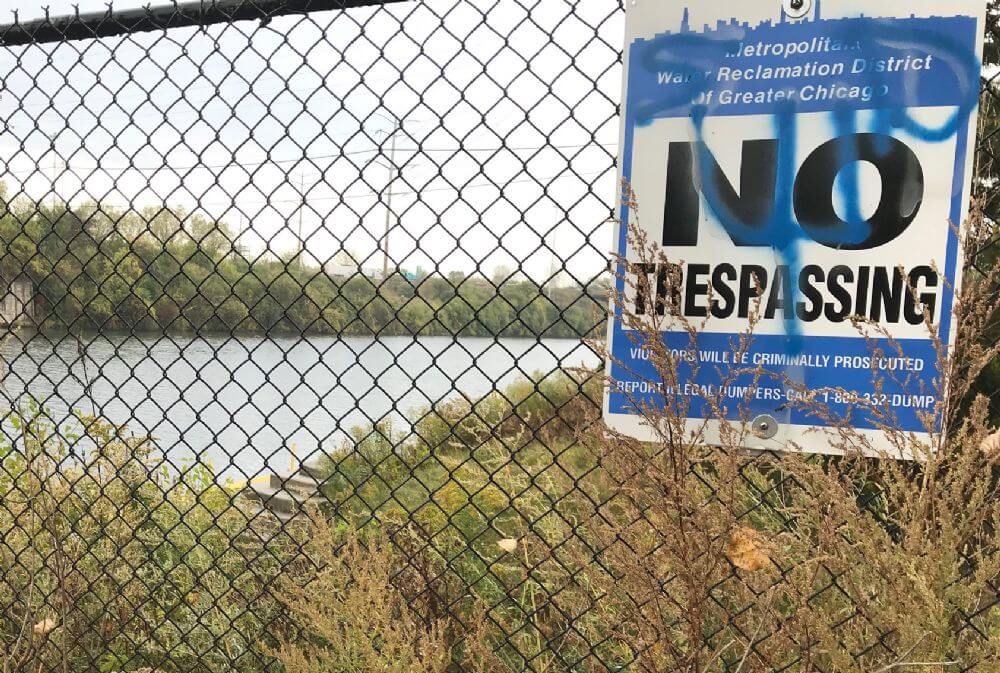 The boat launch in Summit, closed a few years, was cleaned up May 12. Mayor Sergio Rodriguez hopes to develop it for recreation. Photo by Steve Metsch

In other business, the board approved a bid from AirOne in the amount of $130,017 to purchase air packs to be used by firefighters. Federal funding is paying for the majority of the purchase, Fire Chief Wayne Hanson said.

“Most of ours are out of time, not all of them, but we received a grant from the federal government. We pay 5 percent,” Hanson said.

Hanson said a new $256,000 ambulance has been ordered and should arrive in July: “Our ambulance is seven years old and we run five calls a day on it. It’s busy. The old one will now be a backup.”

In a departure from Summit’s blue-on-blue color scheme, one Explorer is painted all black while the other has a traditional black-and-white police car color scheme.

Both should be in service soon, Lt. Ed Zeman said, once equipment is installed.

The old squad cars only have just over 60,000 miles on them and the bodies are in good shape, “but the engines take a beating,” Zeman said, noting the cars are running around the clock.

The board tabled taking action on the village’s annual contribution to the I&M Canal National Heritage Corridor Civic Center Authority. Board members said they needed more information before making the $2,760 contribution.

The village has been a member of the organization for a number of years, Rodriguez said. It annually donates $1,000 to A River Runs Through It, a historical presentation held each September.

The board approved amending liquor licenses, which will permit gas stations to have “pour licenses” that needed for them to install gaming machines.

The village gets $300 annually for each gaming machine in Summit, and also collects a percentage of the money spent on the machines, Rodriguez said.

The village will again participate in the Lyons Township Summer Employment Work Program that helps provide jobs in public works and other departments for youths.

“It’s a good program. If you know any youths looking for a summer job, they can apply at the village or the township. It starts in June and runs through the start of August,” Rodriguez said.

“The township hires college kids. At the village, we hire high school students. We usually get eight to 10 kids,” the mayor said.

The summer schedule will have the board meeting at 7 p.m. on the third Monday each month, June through September.