Two was a big number when Marist played at Nazareth on Saturday.

Marist linebacker Jimmy Rolder made two key interceptions – including one at the goal-line – to stymie Nazareth scoring drives.

Put them together with a stifling defense and you have a 13-0 Marist victory in La Grange Park.

Nazareth was threatening to take the lead in the third quarter when Rolder stepped up in a big way.

After a holding call had nullified a rushing touchdown, Rolder picked off a pass at the goal-line. Marist led 6-0 at the time.

Nazareth junior quarterback Aidan Pieper (9 of 19 for 81 yards) had tried to find a well-covered receiver in the end-zone on third-and-goal from the 14 with 5:07 left in the third quarter.

“We’re right there in the red zone,” Pieper said. “We’ve got to look at just punching it in. But I love this team, I trust this team. I know we’re going to be back.”

“I was kind of floating in my zone and I saw the receiver come across the middle,” Rolder said “My eyes kind of lit up on that one.” 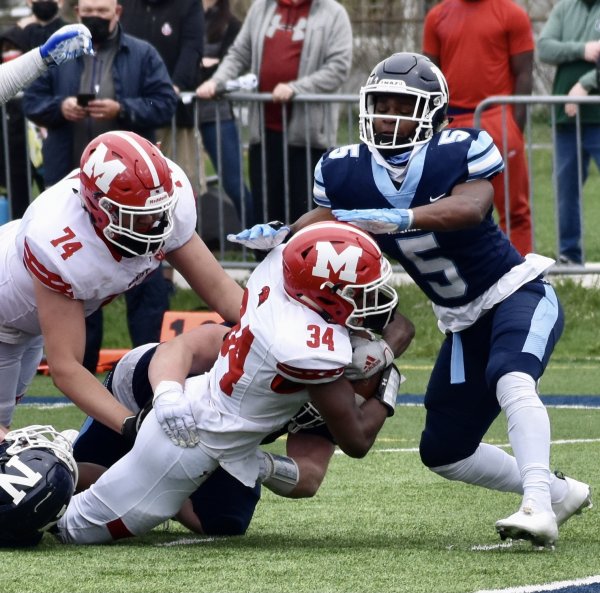 Jamari Grant is stopped on this play, but the Marist senior had a huge day at Nazareth, carrying 30 times for 156 yards and two touchdowns. Nazareth sophomore Kaleb Miller and Marist lineman Justin Loera are also seen in this play.  Photo by Steve Metsch.

Nazareth Head Coach Tim Racki – who has made clear this odd pandemic-shortened six-game season is about giving everyone a chance to play – took the pick-off in stride.

“I tell all our quarterbacks you look at the NFL, look at Division One, they all throw picks,” Racki said. “It’s part of the game. There’s nobody that’s perfect. You just learn from mistakes.”’

Rolder’s second interception came in the fourth quarter with Marist still clinging to a 6-0 lead and Nazareth facing 2nd-and-11 near midfield.

While Rolder led the defense, Grant, a speedy 5-foot-10, 165-pound senior, provided most of the Marist offense, carrying 30 times for 156 yards according to unofficial totals.

The game was scoreless after one quarter when Marist (3-1) started at its own 29-yard line with 10:25 to play in the second quarter.

From there, it was all Grant.

He carried three times for 17 yards, then scored from the one with 5:14 left in the first half. The extra point was missed. Marist led, 6-0.

After the pick-off, Marist quickly moved from its own 44 to Nazareth’s one, from where Grant scored with 9:43 left in the fourth.

“We came through in the second half,” Grant said. “We had that mentality to get as many (points) as we could.”

After Grant’s second touchdown, Nazareth failed to seriously threaten, although Peter Roll did intercept a pass at Nazareth’s 15.

Andrew Hughes, a 6-foot-3, 270-pound senior lineman, wanted to beat Marist in his final game against the Catholic League rival.

“Obviously, it’s not the outcome we wanted, but we can head home knowing that we fought our best,” Hughes said.

“Marist is a great football team and we knew that coming in,” Racki said. “My kids were disappointed after the game. …  However, we fought the entire game.”

“I always tell my kids I want max effort, full speed for 48 minutes, and they displayed that,” Racki said. “In terms of what I expect as a head coach, (the Roadrunners) could not have done anymore.”