Reducing the risk of potential accidents, along with ending delays in commuter railroad service, are goals of a proposed “flyover” that could be built west of Summit Park.

It’s all part of sweeping rail improvements proposed by the Illinois Department of Transportation which, as of now, has no price estimate or funding source.

It’s in the talking stage, so IDOT held a public hearing in the gymnasium at Summit Park on Sept. 19 for residents, business owners and public officials to weigh in with thoughts and questions.

A filmstrip presentation detailed the plan for visitors.

Amtrak has 10 trains daily, Metra’s Heritage Corridor from Chicago to Joliet has seven, and there are 87 freight trains using the Belt Railway line, according to IDOT.

And it may come as a surprise that the two lines actually cross each other at grade level. That’s northwest of the viaduct at Archer Road near 63rdStreet, and southwest of Summit Park.

The potential exists for a major accident there, officials said. But that would be averted by building a long bridge – or flyover – for the commuter trains to safely pass above the freight line. 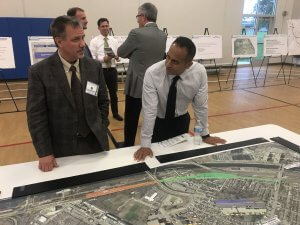 “You are talking a safety issue. It will be much nicer. You won’t have the problems of freight and passenger trains going at the same time,” Kuban said.

The modest Summit Metra Amtrak train station, located west of Harlem Avenue, would be relocated with a single interior platform located between the proposed flyover track and realigned existing tracks.

A tunnel beneath the tracks would allow passngers to safely cross under tracks to the parking lot.

Summit Mayor Sergio Rodriguez noted that only seven commuter trains stop daily in Summit. He likes the tunnel idea and is hoping there’s a way to build a bike/walking path from Summit Park to the station.

The existing Illinois Central bridge over Lawndale Avenue would be rebuilt and a second line added there. The vertical clearance would change from 13 feet, 8 inches to 12 feet, 9 inches.

That worries Rodrguez because he doesn’t want a lower clearance to hinder larger boats from accessing a defunct boat launch on the nearby canal.

Rodriguez hopes to resurrect the launch to even greater glory in the future as a public recreation area. Located roughly at the end of Lawndale Avenue, a revitalized launch could be a economic bonanza for Summit.

IDOT officials assured Rodriguez there will be enough room for boats to be hauled beneath the new bridge.

No residential relocations are needed, but five businesses near the Lawndale underpass “will be impacted and need to be relocated,” officials said. That also worries Rodriguez.

“I don’t have a choice once they get the funding. They talked about this five years ago, but now it seems real,” Klein said Tuesday.

His uncle started the business in 1979 and it’s been in the current location since 1989. The family has deep roots in Summit.

“I do not want to move at all, but I understand the process,” Klein said. He recently bought more land near his business, but it’s not near enough space for the entire towing company, he said.

“I wish they’d tell me, ‘Hey, you’re out of here in five years.’ Then I could make some plans, find a new building. Don’t jerk me around for two more years,” Klein said.

Michael Harris, who works in business relocation for IDOT, said the state will work with businesses. IDOT would  help find new locations and pay owners the fair market value for their properties, and pay relocation costs with moving expenses.

Farther west, two at-grade crossings used by Shell and Kinder Morgan to access their properties on both sides of the rail lines would be replaced with a tunnel designed to prevent potential accidents, said Steve Lynch, of Patrick Engineering.

Lynch has been working on the plans for six years.

“The ultimate goal is to wrap up Phase One, and have the federal government make a ruling on the project if it’s viable to go forward. Safety is always No. 1. Second, to reduce delays for the passenger service,” Lynch said.

One Summit resident, who declined to be named, said she does not like the idea of a pedestrian tunnel at the Summit station, fearing ne’er do wells may hang out there.