Not even the La Grange Pet Parade – an annual tradition since 1947 and arguably the village’s biggest social event of the year – is safe from the coronavirus.

Due to concerns about spreading the virus, and unsure whether limits on large public gatherings will be lifted by May 30, Pet Parade Charities, the non-profit group that presents the parade, has decided to not hold it on village streets as planned that day.

Instead, they will offer “Virtual Pet Parade,” blending short videos submitted by people into a parade that can be viewed on-line starting at 9:30 a.m. May 30, which would have been the kickoff for the 74th annual event.

The decision by the 12-person committee was announced Monday after they had discussed it – with social distancing – via Zoom on-line.

Their choice was “either we reschedule or make it something virtual,” Molly Price, the event coordinator for Pet Parade Charities, said Monday.

They decided to not delay the parade until later this year “because we don’t know when social distancing will end,” Price said. “As it gets lifted, it’s going to be a slow process.”

“(The Pet Parade) is a big event with thousands of people coming together in fairly close quarters. So, we thought this would be the safest way to do it,” Price said.

The popular Pet Parade Carnival, which includes live bands in a beer tent that weekend, is canceled.

Late Monday, Village President Mark Kuchler said not holding the parade downtown “is a very sad development, but not unexpected.”

However, Kuchler is “intrigued” by the virtual pet parade idea.

He said the village administration will likely contribute a video. “We don’t have mounted police or we could be on horses,” he said.

The parade is all about animals. It started shortly after World War II as a way for La Grange kids to show off their pets. It’s evolved over the years.

Pets, of course, are still the main component.

The parade “means a lot to the village,” Kuchler said, adding that he hopes we see it take to the streets again in 2021 for its 75th edition.

“It shows our history. It’s been very popular for decades and it’s a great start to the summer. The residents come out and enjoy it. A lot of people from out of La Grange enjoy it. People who grew up in La Grange come back for the parade,” Kuchler said.

Many residents host cookouts that day. It’s a popular day for block parties, too. La Grange is not issuing block party permits in 2020 again because of the virus, Kuchler said.

For the virtual parade, Pet Parade Charities needs your help.

The group is asking people so submit video clips by April 30. For more information on how to do that, visit www.lagrangepetparade.org.

Scroll down to “Submit Your Video” where you will find instructions. Videos must be shut horizontally and be 10 seconds in length.

Organizers plan to piece together the 100 best clips to form a 30- to 60-minute parade video that will be shown on various social media sites starting at 9:30 a.m.. May 30.

“It will be fun. Not the same. But something to bring joy to the people,” Price said.

According to the site: This video link will be posted on La Grange Pet Parade Social Media and will be shown on: LTTV channel 99 on Comcast and AT&T U-Verse and will be streaming on: www.youtube.com/lttvonline.

Each year has a theme. This year is “The Roaring Twenties: Then and Now.”

“This year is 2020, so we thought of The Roaring Twenties. Somebody may be able to spin it like the roar of the lions, like (the mascot of ) LTHS (Lyons Township High School),” Price said.

The Pet Parade not only attracts locals. Through the decades, It has attracted many big stars as grand marshal and special guests.

Local rocker Jim Peterik – of the Ides of March and who wrote “Eye of the Tiger,” “Vehicle” and other hit songs – is this year’s Grand Marshal, Price said.

“He’s really well known around town … We love his purple hair,” she said, adding she hopes Peterik contributes a video.

Planning for next year’s parade will begin in September, Price said.

The parade is always held on the first Saturday after Memorial Day. The 75th Pet Parade is scheduled for June 5, 2021.

For those who have already donated to the Pet Parade Charities annual fundraiser – a way to fund the event – the drawing for prizes will still be held on May 22, Price said.

According to the web site, the parade costs about $50,000 to present. Raffle tickets are still being sold. 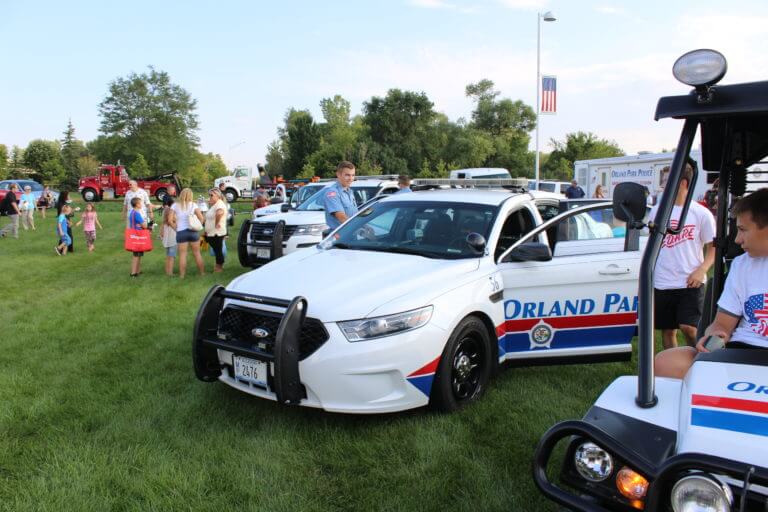 PHOTOS: Orland Park’s National Night Out News
The principals of the matter News