Getty has a plan for St. Hugh property in Lyons

Lyons Mayor Christopher Getty has a plan for the land that for nearly 100 years was home to St. Hugh Catholic Church.

“I can see us doing single-family houses along Joliet Avenue, tearing down the auditorium, and leaving all that parking,” Getty said.

“The gymnasium would have a huge parking lot,” Getty said.

He has ruled out multi-family housing for the land and senior housing, noting the village already had three senior housing sites.

Ideally, he wants to see single-family homes along Joliet Avenue, which is in keeping with rest of the north-south roadway.

Plus, he is very interested in the village acquiring the gymnasium on the northeast corner of the property. It would be used by the parks and recreation department, he said.

“That’s the one item to save,” Getty said of the gymnasium. 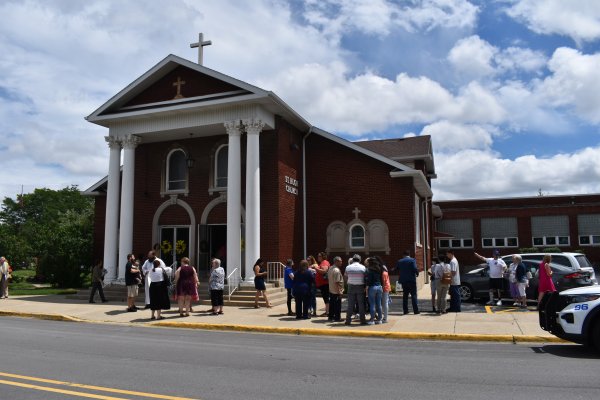 Lyons Mayor Christopher Getty would like to see single-family homes replace the St. Hugh Church and School, but wants to keep the gymnasium for recreation programs. Photo by Steve Metsch.

He noted that demolition of the church and school will probably not be cheap. It cost $300,000 to tear down the old village hall on Ogden Avenue a few years ago, he said.

Another thing Getty also does not want is a long wait until something happens.

“We’ve contacted the Archdiocese and they said ‘You’re way ahead of schedule’,” Getty said. “They just listed two buildings by St. Barbara’s (in Brookfield) and that’s been closed since 2013.”

“We said that we’re going to stay on top of this,” Getty added. “We don’t want the buildings sitting for years.”
The final mass was said June 27 at St. Hugh. It has merged with parishes in North Riverside and Riverside.

Two messages left with the Archdiocese were not returned.