Like many musicians, Joe Fascetta has had an odd year.

Gigs dried up for months after the coronavirus pandemic hit hard in March 2020 and the nation shut down.

But unlike the big-name bands who have not been able to tour or perform, the opposite has held true for Fascetta.

The guitarist/singer, formerly of Worth and now an Oak Forest resident, has had steady work since last summer. Last month, he had seven gigs in five days.

“April is totally full. May, I’ve got a few days left. I’m booked every Saturday in June for private parties. I think it’s going to be real good summer,” Fascetta said in a recent interview.

When all heck broke loose last year, it was just after he played a gig in Naperville. Instantly, shows he had planned on to bring income were not happening.

However, he was prepared.

“You know, I say this to everyone and sometimes it rubs people the wrong way, but if you’re a 30-plus-year-old man and you have kids and you don’t have a couple months (of money) put away, you’ve got bigger problems,” he said.

Fascetta, 33, is married with a 5-year-old son and 2-year-old daughter. 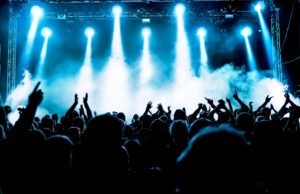 The pandemic gave him more time to spend with them, provided his voice some rest he needed, and allowed him to work on completing his second compact disc.

“I tried to look at it the best way I could, spend time with my wife and kids as much as I could, and realizing that we’re never going to get this kind of free time together again,” he said.

“As frustrating as it was, as hard as it was, 90 percent of the time I was lucky to soak it in,” Fascetta said.

About three months into the pandemic “once things got opened up outside,” he suddenly found himself “crazy busy.”

“Being a solo act, no one wanted to pay full bands because that’s not cheap,” he said. “I was kind of reaping the benefits of being one guy who can fit in a tiny corner and play.”

A recent Sunday afternoon found him in a corner of a tent outside Dell Rhea’s Chicken Basket in Willowbrook, performing the music of Tom Petty, Pink Floyd, The Bee Gees, Van Morrison and George Michael to name a few.

“I play everything,” he said of the diverse set list.

He soon followed that with a gig playing country music at Bub City in Chicago. It had been more than a year since he performed there.

Fascetta, who had been working at the Board of Trade, was one of those rare people who follow their heart. He walked away from that job to focus fulltime on music in 2013. His first CD, “Mr. Not Right Now,” was released that year.

“They were the first people to call me once outside stuff opened up, so I figured the least I could do was have my release party there for them,” he said. “They were happy. I was happy.”

“It’s a meaningful album to me,” he said. “It’s songs about my wife and kids, and being a dad and all that kind of stuff.”

While he usually doesn’t play his own songs in shows, leaning toward songs folks know, but he may dust off one he wrote last year called “Pandemic Song.”

“It’s a great catchy song,” he said. “But it’s more vulgar, meant to be a comedy song. It’s very clever and, if I may say so myself, very well written.”

You can find that song and his new CD on Spotify, Apple Music, Sound Cloud and Amazon Music. He has a Facebook page called Joe Fascetta Music.

Fascetta expects to be busier this summer “as a lot of people are getting the vaccine.”

Yes, he sees light at the end of this very, very long pandemic tunnel.

“I could be totally wrong, but I feel the second we got a new President,” he said. “It’s moving a little quicker. They ‘why’ doesn’t really matter. I just want my life back.”