Students, staff and faculty at Lincoln School in Brookfield welcomed yet another new face in the principal’s office this week.

Mindy McMahon, who was a principal for 23 years at a school in Hinsdale, was hired Monday night by the Lyons School District 103 board as interim principal to cover the remainder of the current school year at Lincoln.

Her first day on the job was Tuesday.

McMahon replaces Andrea Maslan, another retired principal, who had been filling in for Tara Kristoff, making McMahon the third principal at Lincoln this school year.

Kristoff, who was in her first year at Lincoln, was placed on paid administrative leave Feb. 14 for “insubordination” and resigned March 11.

Maslan is the retired former principal of Costello School in Lyons. She had been working part time in the District 103 central office where she will return.

McMahon, 62, retired in 2015 from her job after 23 years as principal of Madison Elementary in Hinsdale, a Blue Ribbon-winning school.

“She has the retirement boredom blues or something where she wants to come back and do this again,” interim Supt. Patrick Patt joked.

“All kidding aside,” Patt added, “I think she was dropped out of the sky for this one.” 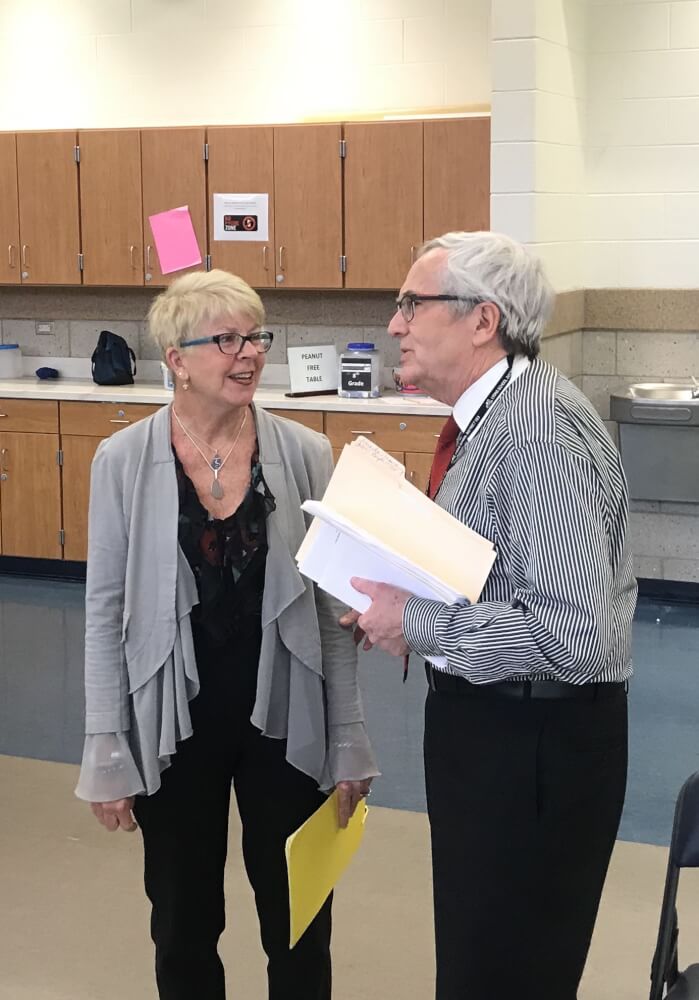 Mindy McMahon chats with acting Supt. Patrick Patt after the Lyons School District 103 board hired her to be principal of Lincoln School through this school year. She’s the third principal at Lincoln in the 2018-19 academic year. Photo by Steve Metsch.

He said McMahon was referred to 103 officials by Maslan, who “knew somebody who had a nice connection with retired principals,” Patt said.

“The nice thing about Mindy is she was in Hinsdale for 23 years in one building. After she retired, they had an opening for an interim principal in that same district and they brought her back. That tells you something about how impressed Hinsdale was with her work,” Patt said.

Her hiring was approved by a 5-2 vote with Michael Bennett and Jorge Torres opposed. Torres said the hiring seemed rushed and he needed more information about McMahon.

Board member Joanne Schaeffer said McMahon “has the experience.”

Board member Shannon Johnson said McMahon “has that nurturing quality about her and that’s something Lincoln needs right now.”

McMahon, an alum of Ohio State University, said she has taught in the master’s program at Concordia and has supervised student teachers from the University of Illinois and did some consulting since retiring. She also did some mission work in Cuba.

When she learned of the opening at Lincoln, she told herself, “I can do this.”

She’s well aware of the strife in School District 103, but is agreed to the job because of “the kids, the staff, the parents.”

She cannot be a candidate for the permanent job as principal of Lincoln because she is retired, she said.

She knows there’s been “a lot of change” at Lincoln, so she will “have to establish trust and relationships with all constituents to make sure they feel safe, supported and heard.”

McMahon will be paid $550 per day, Hubacek said. That’s $50 more per day than Maslan was being paid, a source said.

During the public comments of the meeting, Theresa Schubert, whose daughter attends Lincoln, asked the board to do a good job picking a principal for the 2019-2020 school year.

“Please, please choose very carefully. We have gone through three principals in three years. Our kids at Lincoln deserve so much better than this revolving door,” Schubert said.

Hubacek said she hoped Schubert would serve on a screening committee. Schubert agreed she would.

“We’ll work at finding a permanent replacement who, hopefully, will stay for a long time,” Patt said.

McMahon and her husband live in a western suburb. Their daughter majors in chemistry at the University of South Carolina, where she is a junior. Their son left college after his freshman year “trying to decide what he’s going to do.”

Her husband is named Jim McMahon, yes, just like the Bears’ former quarterback. That has led to some amusing moments.

They often received phone calls at home from football fans. “They’d ask if Jim McMahon was there. I’d say, ‘yes, but not that one’,” she said.

Once, making a reservation at Ditka’s Restaurant, they were placed at a very good table next to the former Bears coach. “He was very gracious to fans who approached him,” she said.