The four candidates running together on the Parents For Student Excellence slate for seats on the board of Lyons School District 103 agree it’s time for a change.

They are running for the four seats to be voted on April 2.

In a flier distributed to voters, the PSE slate said, “The residents and staff of our school district deserve safe schools, transparent leaders, quality education and responsible spending.”

Torres, who with board member Michael Bennett is in the minority on the current board, is often treated as such by the majority. Why would he want another four years?

“The reason I want to come back is to make sure that all these people who care about their own agendas and friends and family are no longer able to damage our school district anymore,” Torres said.

Bennett has decided to not seek re-election. His seat is open. Longtime board member Joanne Schaeffer and newcomer Tom Weiner are seeking election along with Torres. 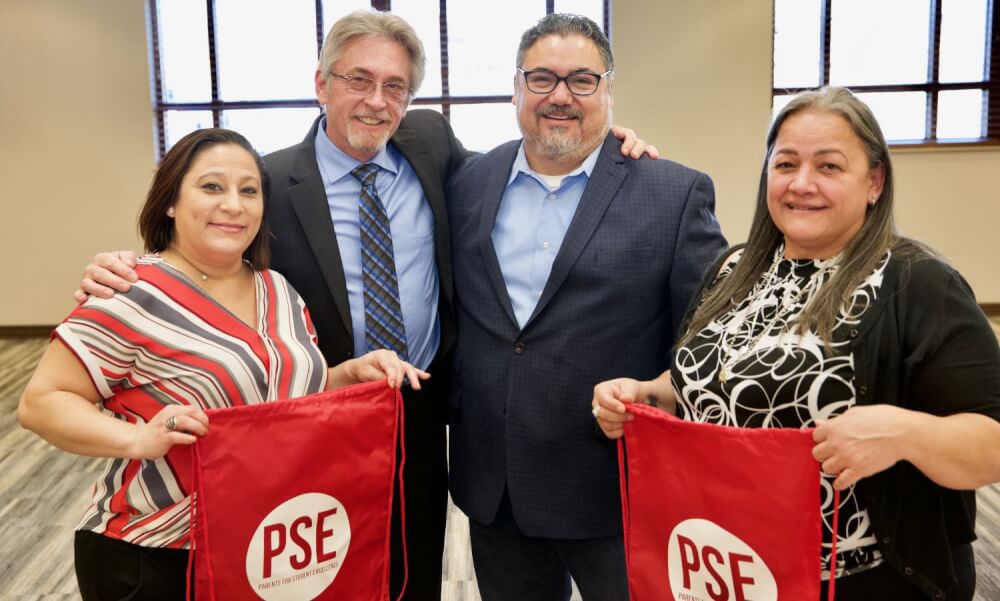 Olivia Quintero, Vito Campanile, Jorge Torres and Winifred Rodriguez are the Parents for Student Excellence party and are running in the April 2 election for Lyons School Board 103. Supplied photo.

Torres, 48, a Lyons resident, is concerned about a “toxic” atmosphere on the board where members are often at odds with one another.

Torres is also concerned about the district’s financial wellbeing.

“Our human resources director makes $120,000 without any background. She’s a former principal,” Torres said. “We’re over budget close to $3 million. It started with salaries.”

Nor is he happy the district is paying two former superintendents to cover that office during the 2018-19 school year.

His running mates are also concerned about that. That’s why they’ve been attending board meetings regularly.

Quintero, 40, of Stickney, has a fifth-grade daughter in Home School. Two older children at St. Rita High School graduated from the district. She’s running “because there are a lot of issues and it’s gotten worse.”

She’d focus on bullying, saying “we need to train our staff on how to address it.”

If elected, Quintero said she will work to “make sure there’s proper hiring procedures for anyone working with our children because our kids are the first priority.”

Spending is another issue: “Our district gets a lot of money (in property taxes) from five towns. Where is it going?”

Quintero said it’s “very sad” the principals of Lincoln and Robinson schools won’t be returning. One was forced to resign, and the other’s contract is not being renewed.

“They never said why. But through people I’ve been talking to, it looks political to me. Now (Al Molina) takes a position as a teacher or he’s done (in the district). He’s been there 14 years. It’s pretty sad,” she said.

Campanile, 56, of Brookfield, said one or two of his three grandchildren will soon be attending school in the district. He’s been on a school board in Berwyn, and spent 20 years with the Berwyn Little League.

“I have many reasons to be on the board. I have a background working with youth programs. We have to ensure the safety of our children,” Campanile said.

He advocates doing national background checks annually on every person working for the district. “I used that for 10 years when I was president of Little League in Berwyn,” he said.

He referred to the hiring last year of a teacher who had been charged with attempted murder in a road rage incident. Yet, that didn’t surface in the hiring process. That teacher, after uproar from the community, has been fired.

The board, he said, “is wasting money on legal fees, defending themselves. That’s ridiculous, mismanagement of money,” he said.

“We need to bring back complete transparency,” Campanile said, referring to the recent decision to not renew the contract of Al Molina, principal of Robinson School for 14 years.

“Why are we doing stuff like this? I don’t get it. People I’ve spoken with have raved about how great he is,” Campanile said.

He’s also not pleased with the forced resignation of the Lincoln School principal. Officials have not revealed details of her alleged “insubordination,” he noted.

Rodriguez, 55, wants to be on the school board “to make a difference.”

She is disappointed by what she considers “a lack of professionalism” on the current board.

“When people are making comments in a meeting, you have some people on the board rolling their eyes. That’s not professional,” she said.

“I have a niece and nephew who graduated from here and I may have more family members. I feel for the parents in this community. The most important things to me are the education and safety of the children,” she said.

She finds it offensive that the board limits speakers–even McCook Mayor Jeff Tobolski at a meeting last fall—to just three minutes during public comments at meetings.