Do you have any plans Thursday night? If not, you should take a short drive north and attend The Eagles’ concert at the new Fiserv Forum in downtown Milwaukee.

After seeing Monday night’s concert at the United Center, I’m tempted to drive up there myself. Yes, it was that good.

Going into the evening, I frankly didn’t know what to expect without Glenn Frey, who died in 2016. Frey was one of the two Type A personalities – Don Henley being the other – who drove The Eagles since their inception.

I’m happy to report that the two musicians brought in to fill Frey’s shoes did an admirable job.

His son, 25-year-old Deacon Frey, was joined by Vince Gill, the talented country music superstar, he of the dazzling guitar and the honey-soaked singing voice. While they don’t make you forget Glenn Frey, as if that was possible, they do a heck of a job filling in. 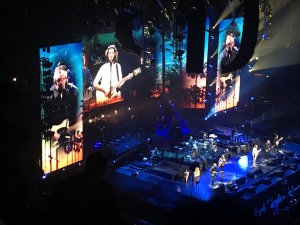 It’s not often, as I told my party, that you can leave a show and not have at least one thing to beef about. Maybe it’s the song selection, the sound, a lack of enthusiasm, no banter with the audience, the lights, whatever. Usually, there’s something that gets under your skin. Try as I may, I can’t find anything wrong with this show. Okay, maybe they could’ve played “James Dean” or “The Sad Cafe.” But they did play 26 songs over two and one-half hours. Not many bands do that.

The Eagles played on a large, expansive stage which was good since they needed room for five string players and five brass players. The steady exchange of guitars was impressive, too. So were the large video screens behind the stage that afforded huge crystal-clear views of the performers. And the sound, as always with an Eagles concert, was perfect.

The show started with a beautiful take on “Seven Bridges Road” featuring Gill, Frey, Timothy B. Schmit, guitarist Steuart Smith, Joe Walsh and Henley – who bounced between drums and guitar all night – standing at the front of the stage strumming guitars. After that, it was a well-chosen tour of the Eagles’ career, as Henley said, “paying tribute to Glenn Frey’s legacy,” along with some songs from their solo endeavors. And that went for Gill, too, who shined when the band played one of his hit songs, “Don’t Let Our Love Start Slippin’ Away.”

If you’ve never seen Gill, 61, perform, you should. He’s so talented on guitar, has a warm and friendly stage presence, and has that silky smooth voice that is such a treat to hear. I’d pay to hear Vince Gill sing the phone book.

All the band members were in fine voice. Schmit, 70, effortlessly still hits the high notes, and has a funny bone. He had fans laughing when, while talking about Walsh, he paused and said, “we never know what to expect from Joe.”

True, so true. And thank God for that. Walsh, 70, who famously quit the sauce years ago, is still the life of the party. He can jam with the best of them, and just watching his his rubbery, expressive  face is quite entertaining. “Good morning. How ya doin’,” Walsh said to the crowd’s delight after the opening song.

Then the band played one of their biggest hits, “Take It Easy.” The original was sung by Glenn Frey. If there was any pressure on his son, it didn’t show. Deacon Frey nailed the vocals and an appreciative crowd roared.

After Henley, 71, sang “One of These Nights,” he told the older crowd in a slightly less than sold-out United Center, “thank you for coming out on a school night.” It had us laughing.

Then it was time for Gill’s Eagles debut for the evening. He delivered like a seasoned veteran called on to pinch-hit, with a spot-on take of “Take It To the Limit” followed by a tasty “Tequilla Sunrise.” Assuring the crowd that filling the absence of Glenn Frey was in capable hands, the show carried on leading listeners through a tour of the band’s impressive resume.

Walsh, long a crowd favorite in Chicago – possibly from his many guest spots on Steve Dahl’s various radio shows through the years – brought a huge roar when he started playing “In The City,” the band’s contibution to the 1979 movie “The Warriors.” His voice sounded as good as his guitar solo. I guess clean living does have its benefits.

Some of the highlights included Gill’s singing and his impressive guitar work on”New Kid in Town;” a beautiful rendition of “I Can’t Tell You Why” powered by Schmit’s singing and the lead guitar of Smith, with the band since 2001; and Deacon Frey’s vocals on “Peaceful Easy Feeling” after which a photo of his father was on the video screen, a touching tribute.

Introducing “How Long,” a song written by J.D. Souther for their  “Long Road Out of Eden” double album, Henley said “that came out in 2007, our first studio album in 28 years. We don’t like to rush into things.”

I enjoyed how this hybrid band of Eagles really seems to get along quite well. Years ago, that famously wasn’t the case. On Tuesday night, after Gill deftly sang the still-powerful story song “Lyin’ Eyes,” Schmit, looking at him, said, “that man can sing.” 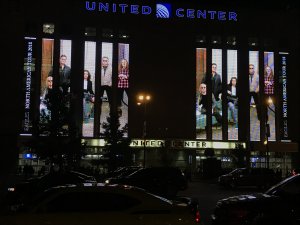 The Eagles delivered a memorable night of music Monday at the United Center. Photo by Steve Metsch.

Of course, it wouldn’t be an Eagles concert without letting Walsh have center stage.

And he made great use of it it when he rocked the house with the old James Gang hit “Walk Away,” featuring an extended jam.

And the crowd loved it when he played one of his biggest solo hits, the autobiograhical “Lifes Been Good.” Does he still drive 185 or live in hotels, tearing out the walls? Probably not. But it’s Joe and Chicago loves Joe, who coached us all to yell “baloney” during a part of the song. He even changed a lyric: “They send me e-mails, tell me Vince is great.” Joe’s a lot of fun.

The solo Henley song “The Boys of Summer” is as haunting as it was when released in 1985. Using a brass section several times was a nice touch Monday night, espeially when it jazzed up another James Gang classic, “Funk #49.”

A an extended trumpet solo introduced the first encore song, “Hotel California.” Forty-two years later, I’m still not sure what those lyrics are about. It made me think of seeing the reunited Eagles on their “Hell Freezes Over Tour” in 1994. They opened in Tinley Park that night with “Hotel California”

The crowd brought the band out for a second encore: Walsh’s rollicking “Rocky Mountain Way” followed with a heartfelt “Desperado” with Henley at center stage, bathed in a solo spot, as an all-female string section played.

Leaving the UC, my party of four agreed that the concert couldn’t be any better.  There is a reason “The Eagles Greatest Hits, 1971-1975” is the top-selling album of all-time. Do yourself a favor Thursday night.