After long pandemic delay, 36% of kids are back

Tuesday afternoon will be the first time in the 2020-21 academic year that students will be permitted in Lyons School District 103 school buildings.

Supt. Kristopher Rivera, at the school board’s meeting on April 27, announced that the long-awaited return will start on Tuesday, May 4 and continue through the month.

The final day of classes is May 24.

More than one-third of the district’s students will be in the school buildings.

Although the time in school will be a brief three weeks, “it’s better this year than next year,” school board member Vito Campanile said after the meeting.

Students will be limited to two days a week in the buildings on a Tuesday and Thursday or Wednesday and Friday schedule, Rivera said.

He stressed that attendance in the buildings is not mandatory. Parents, he said, have the option to not send their children to the school buildings. 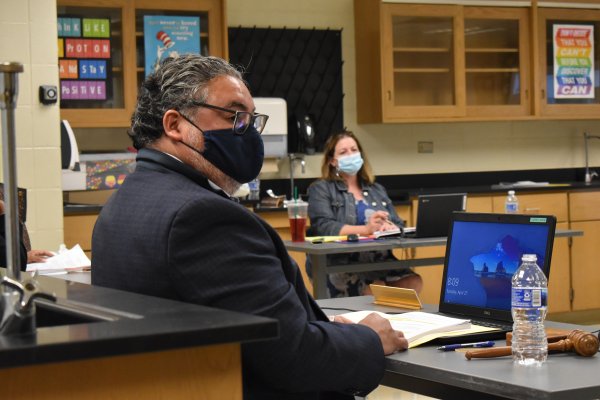 Lyons School District 103 Board President Jorge Torres is happy to welcome students back to the buildings, saying “it’s been a long road, months.” Photo by Steve Metsch.

Since the 2020-21 academic year began in August, District 103 had been one of the few districts in the state that has not permitted students in buildings. That was because positive test results for the coronavirus, officials said.

Rivera said Thursday that 823 students are expected to be in the buildings. The district has a total of 2,298 students, he said. That’s 36 percent in-house.

Rivera said he understands that some may not be able to attend because their parents – because of work, etc. – can’t get their children to school on such short notice.

“It could be that. It could be concerns about the pandemic, or just child care. There’s a lot of obstacles when you’re looking at students for coming for half a day. I understand those obstacles,” he said.

Remote learning that has been in place since August will continue for most of the school days. Two-hour sessions in the buildings will be free of technology and focus more in personal interaction, Rivera said.

In a recording on the district’s web site, Rivera walks parents through what will be happening with students back in school. Social distancing will be observed and face masks will be required.

The district didn’t want to wait until the fall to re-open buildings, Board President Jorge Torres said.

Officials “saw the excitement in our kids” when they returned to the schools for mandatory testing last month, Torres said.

Mondays will be reserved for thorough cleanings of the buildings, Torres said.

Rivera said there have been long talks with unions for the teachers, the aides and the custodians. All are on board. That said, he is very excited for the kids.

“The main thing is getting these kids reconnected,” Rivera said. “We’ve had them in for testing and I’ve never seen kids so excited to come in for testing. It speaks to their need for interaction.

“We’ve been shut down for a year,” Rivera added. “A lot of families are conservative about letting their kids go out into this public pandemic type of environment. “

Classrooms will be cleaned daily and overnight, he said. Water fountains remain covered and not used. Stickers found all over the buildings will remind students to stay six feet apart. Health screenings will be given visitors.

“We have a very safe way to conduct a school environment here,” he said. “There’s going to be no technology. We’re going to focus on social emotional learning and engagement activities. In person,” Rivera said.

Pre-kindergarten will have a minimum of two days a week, with possibly four, he said in the recorded message.

Those students reluctant to come in will be provided “with engaging activities to try to emulate what the kids are doing in school,” he said.

Rivera is hoping that this three-week test results in students attending full days in when the 2021-22 academic year begins in August. But he added that “there are a lot of factors” that may delay that.