Restaurant owner is sworn in as McCook’s mayor

Terrance Carr is no longer an acting mayor.

Carr, who had been named acting mayor of McCook on April 1 of last year, was sworn in for a four-year term as mayor Monday night by Cook County Circuit Court Judge John Michael Allegretti.

“It feels good, real good,” Carr said after the ceremony.

The ceremony, with a nod to social distancing, was held in the garage that normally houses fire department vehicles.

The large doors were open. Air circulated freely for a 15-minute ceremony and village board meeting that seemingly drew each resident of the tiny community.

Padilla was elected in April to fill the board seat that Carr had held.

Carr had served the remaining year of the term vacated by embattled former Mayor Jeff Tobolski, who resigned in early 2020 while under federal investigation about extortion. 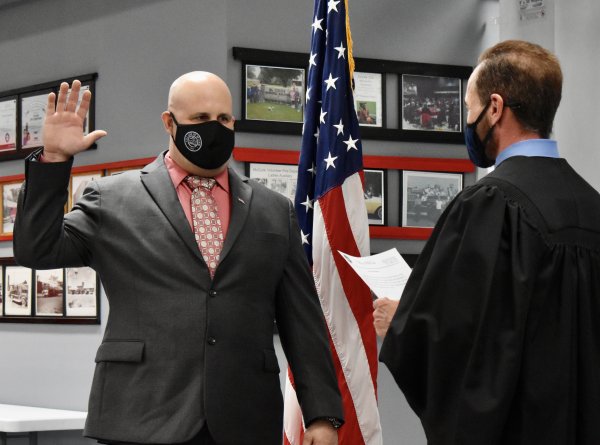 Terrance Carr was sworn in as mayor of McCook by Cook County Circuit Court Judge John Michael Allegretti on Monday night. He had been the acting mayor for 13 months. Photo by Steve Metsch.

After the meeting, Carr preferred to focus on the task at hand instead of past problems.

First and foremost, he plans to name a new police chief and deputy police chief when the board meets on June 7.

Former police chief Mario DePasquale, demoted by the board last autumn, has pleaded not guilty to a federal indictment that he allegedly participated in an extortion scheme with Tobolski.

In the indictment, DePasquale and Tobolski allegedly split $1,500 they had demanded from the owner of the former The Pub at the Max restaurant.

The Pub at the Max had been part of the McCook Athletic & Exposition Center facility until it closed in 2018 and was replaced with another eatery.

The replacement, Alta Grill, was closed down because of the coronavirus pandemic.

Carr is a restaurant owner. He owns the Steak-N-Egger diner chain his grandfather started. There’s one on Joliet Road in McCook, where the former Snuffy’s had been for decades.

Monday’s swearing-in ceremony had a festive feel, as though board members and residents are eager to shake the shady recent past.

“We’ve got to replace the police chief, the deputy chief,” Carr said. “The rest of my staff is fabulous. There are no changes. They all work hard. Nobody has anything to worry about at this time.”

“It’s been a rough road. Everything that could go wrong, did go wrong. Then COVID-19 came. I didn’t lose my hair, but my goatee sure got gray,” the bald-headed Carr said with a hearty laugh.

He hopes to “pave a couple roads this year.” And he hopes to upgrade public safety.

“We just bought a brand-new fire truck,” he said. “We’ve ordered some new squad cars. Two to four at this time. We’ve been waiting. We had to hire a mechanic to maintain our fleet as it’s going. Been working out great so far.”

The fleet has to be maintained, he said, because it’s nearly impossible to get new vehicles delivered in a timely fashion.

“We ordered from Chevy and they said ‘Maybe September you’ll get one.’ One. We ordered four,” Carr said. “It’s unbelievable.”

He’s been told there’s a year wait just for a new dump truck.

On the plus side, a new tenant has been found for the former Alta Grill site. “We’ll build a patio over there,” Carr said.

Tuckpointing is ongoing at the municipal center, he noted.

Among the well-wishers at the event were Carr’s family members like his 13-year-old son, T.J.

“It’s pretty cool,” the seventh-grader said about his father being the mayor.

“That stuff doesn’t go to my head,” Carr said. “You know, we own a family business. You have to treat everybody equally. It’s the way we look at it.

“Everybody is the same,” the new mayor added. “I change light bulbs. I mow grass. I shovel the sidewalks. I’m not too good for any of it. Whatever I ask anybody to do, I’ll do myself. That’s the bottom line.”