A special birthday is being celebrated in Lyons: The Lyons Fire Department is 125 years old.

“At the helm we have a phenomenal individual who very much so takes his job and what he does to heart,” Getty said.

“I remember the 100th year anniversary like it was yesterday,” Nord said during the Jan. 19 board meeting. “Time flies, but the fire department continues to progress.” 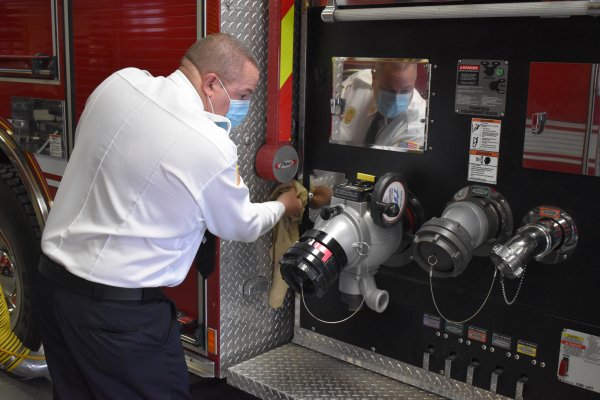 Lyons Fire Chief Gordon Nord, Jr., who joined the cadet program in 1977, polishes the new fire engine at the firehouse on Joliet Avenue. The department is celebrating its 125th year. Photo by Steve Metsch.

The fire department started Jan. 21, 1896, when the board approved purchase of a fire engine, Nord said.

On Dec. 1, 1896, then Fire Chief Phillip Persian reported “he had six officers and 10 firefighters,” Nord said.

Back when it started, the chief was paid $8 a month and volunteers 50 cents an hour for working a fire. The first man to answer an alarm got a $1 bonus, according to the 1996 centennial book about the department.

The fire department was first housed in the old village hall, then moved to a building – shared with public works – on Collins and Joliet avenues, just south of the current site. The construction cost was $1,976 in 1911.

A new truck purchased in 1927 was repossessed for lack of payment. A group of citizens loaned the village money needed to get the truck back.

In 1949, the firehouse north of Collins on Joliet – the current site – was built. A portion of that building remains.

In 1973, three bays were added on the north side of the firehouse, along with a drive-through bay in the back. A second floor was added.

“It was a huge improvement,” Nord said. “In 1973, that was one of the top-notch firehouses around. Really a nice building.”

The pumping station that had been on the corner of Joliet and Collins has been replaced by a parking lot.

“The building looks great, and the area looks great now. Like I said, we keep moving forward,” Nord said. 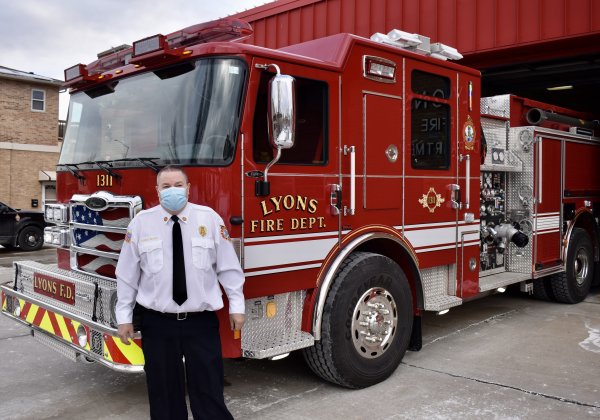 The newest addition to the Lyons Fire Department is this fire chief behind Fire Chief Gordon Nord, Jr. Photo by Steve Metsch.

In the 1970s, there was talk of a second firehouse on the village’s west side with a library on the second floor, but that never happened.

The department, which long ago had been volunteer, has evolved.

“It’s a combination department, a combination of full-time, contract and part-time employees,” Nord said. “You want to talk about dedication? My guys are dedicated.”

The department offers around-the-clock coverage and has gone from “very old equipment to some very new, top-notch equipment.”

A new fire engine was added in 2020. A new ambulance in 2016. Equipment is often upgraded. Lyons has gone from an unmanned station to one that is manned 24/7.

“We’ve entered into automatic response agreements with the village of Riverside, Brookfield and Stickney,” Nord said.

“That allows us to have a larger number of people on the scene immediately when we need them. That’s been a phenomenal working relationship with each of those towns.”

The communications center now based in Oak Lawn “has been a great enhancement to the village.”

Each fire engine has its own generator and lighting system often used to help on police calls.

“I couldn’t be more proud of what we have,” Nord said.

Nord, 58, is a homegrown guy who graduated from Lincoln Elementary School.

He thanked the village board for its support, along with fire prevention officer/administrative assistant Larry Sherwyn, and all the firefighter/paramedics.

“I’ve always said the village has taken care of us far as the equipment goes,” he said. “We get stuff that lasts with a good reputation and a name behind it.”

Nord’s photographs of fires have often appeared in firefighter magazines, sometimes on the covers. He started shooting photos as a cadet and the hobby grew into his passion.

“Back when I was a cadet, the only way you’d get to a fire was by taking photos, so I learned how to use a camera,” he said.

Asked if he preferred fighting fires on cold winter nights or on hot summer days, he’ll take January over July.

“The ice (that covers firefighters) sort of insulates your warmth,” he said. “In the summer, once you’re hot and sweating and wearing 50 to 60 pounds of gear – heat on top of heat – it’s not good.”

There is one fire that still resonates: Halloween Night 1979 when the famed Magnam’s Chateau Theatre & Restaurant, 7850 Ogden Ave., burned to the ground. It was roughly where the McDonald’s is.

“I was still a cadet and we were getting ready for what was then called Burning of the Witch,” he said of the Halloween tradition held on the grounds of Washington School.

“We got to the fire house and there were all these sirens.” That raging fire kept firefighters busy that night and into the next day, he said.

Nord said he’s like all the Lyons firefighters over the years who have learned from their predecessors. people like the late Jim Spolar, fire chief from 1958 to 1985.

“Hopefully, you leave it better than when you took it over,” Nord said. “There have been a lot of dedicated firefighters through the years.”

Getty said some events will be held to commemorate the 125thyear, “most likely in the third and fourth quarter of 2021. 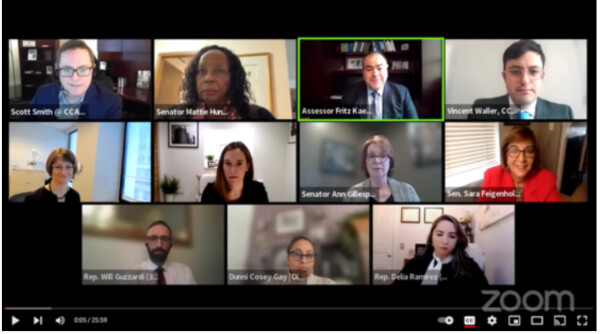 For Pekau, it is always about him, even in closing Secretary of State’s Office Blogger