Board approves plan for teachers to remain home

Teachers in Lyons School District 103 will be allowed to teach remotely until numbers regarding the coronavirus pandemic are down to what is considered safer levels.

In a rare unanimous vote, the seven members of the school board – at their meeting at Washington Middle School on Jan. 26 – approved extending a memo of understanding about teacher work locations.

Supt. Kristopher Rivera said “they had to bring it back because it had a timeline.”

“This (agreement) expired July 31,” he said. “So, what we said differently was when the metrics allow us to come back to school, that’s when it will end. That’s the only difference.”

Metrics for each ZIP code served by the school district must be in the minimal category for seven days to trigger the beginning of a plan to implement a blended/hybrid learning model, per the agreement.

Needed is a minimum test positivity rate of less than 5 percent, and less than 15 per 100,000 new cases in each of the ZIP codes served by School District 103, Rivera said.

“Last week, they were all under 10 (percent) so (the numbers) are coming down,” Rivera said.

“But it’s a race between that and the vaccinations,” he said. “At the same time, we’re working with the unions on discussing vaccination planning and what not. I’m hopeful we can get the kids (in school) to end the year.” 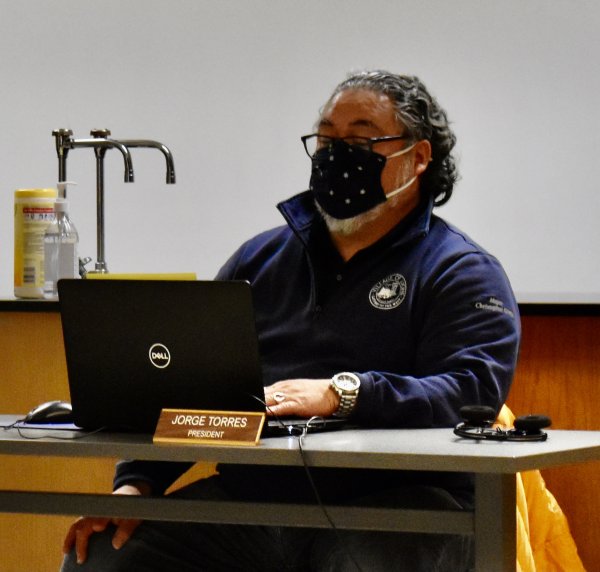 Lyons School District 103 Board President Jorge Torres was included in the unanimous vote that allows teachers to continue working from home until COVID-19 levels are deemed safer. Photo by Steve Metsch.

Board member Sharon Anderson is pleased as she’s been a big proponent for allowing teachers to work remotely as long as it takes, and not having to come into the school buildings.

“They’re all pretty much home now, I believe,” Anderson said. “Some do come in, but once things started ramping up again (they were not).”

Board member Vito Campanile is also pleased with the agreement.

“I’m good with it,” Campanile said. “I don’t think (teachers) get enough appreciation. It’s something they really wanted and I believe in it.”

“I’m really hoping we can get everybody vaccinated as soon as possible to make it safe,” Campanile added.

The majority of teacher are already working from home, Campanile noted.

In other action, the board approved hiring Harreson Sloier as a physical education teacher at Lincoln School for $46,278 a year.

The retirement of Maria Turcich, a reading interventionist at Robinson School, was approved. Planning far ahead, Turich will retire at the end of fiscal year 2025.

Rivera gave the board an extended report on how he and his management team are working toward achieving goals assigned him by the school board.

“My team is working hard,” he told the board.

During public comments, which were phoned in, former board member Tom Weiner said that with the return of indoor dining in the Chicago area, “we should be able to have the school board meetings open to the public.”

Since the pandemic began, the board has met in a science classroom at Washington Middle School in Lyons. It formerly had met in the cafeteria and meetings were well attended by the public.

“I hope we can do that within the next two months,” Weiner said of the public being able to once again attend school board meetings.

Just like in-school teaching, that depends on the rate of infection during the pandemic, Rivera said.

The board’s next scheduled meeting is at 7 p.m. Feb. 23 at Washington Middle School. Right now, public access would again be via telephone.