Accused felons released without bail awaiting trial are committing more violence in Cook County. It’s the ugly secret that Gov. J.B. Pritzker, Cook County States Attorney Kim Foxx and Chicago Mayor Lori Lightfoot don’t want to talk about. In the past year ore than 60 suspects awaiting trial released by the system in Cook County have committed murder, killings that could have been prevented had the suspects been incarcerated while awaiting trial.

Listen to those who are defending the Safe-T Act and ask yourself, what are they saying?

Basically, their efforts to defend the Safe-T Act are to argue that “It’s not as bad as critics make it out to be.”

But the real question is this. What does the Safe-T Act do to make law abiding citizens safe?

No one can answer that because the Safe-T Act isn’t about protecting law abiding citizens. The entire focus of the Safe-T Act is to relax regulations that are cumbersome on the judicial system, mainly in Cook County, and ease restrictions and punishments for criminals.

The issue of cash bail is important, but you can’t just accept the argument of Safe-T Act proponents that the law allows poor people who can’t afford cash bail who commit “minor crimes” to be released without having to out up any money.

The Safe-T Act doesn’t say that individuals accused of minor crimes who can’t afford to post cash bail should be released while awaiting trial without posting cash. The whole idea of cash bail is to compel accused criminals to return to their court hearings, and to prevent them from committing more crimes.

The Safe-T Act says imposing Cash Bail on ALL criminals is no longer mandatory, and they leave it up to a Cook County judge to determine which criminals should post bail and which should not.

Do you really trust a judge in Cook County in a system corrupted by Cook County States Attorney Kim Foxx to make that decision? Where is the line between “minor crimes” and “major crimes.”

The Safe-T Act removes the cash bail requirement for all suspects including those charged with rape and murder. It says a judge will decide if the rape or murder suspect can be released without posting cash or other equity to prevent them from failing to return to court. 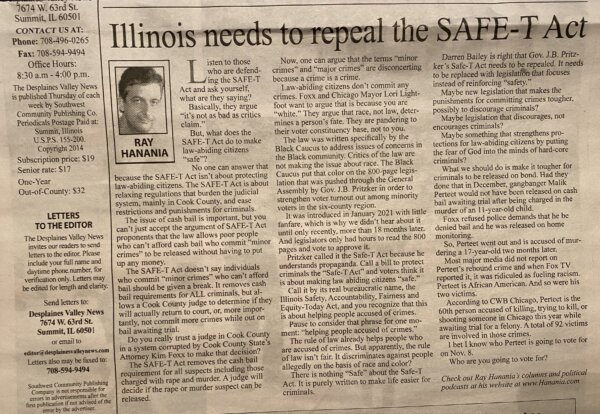 Now, one can argue that the terms “minor crimes” and “major crimes” are disconcerting because a crime is a crime.

Law abiding citizens don’t commit any crimes. Foxx and Chicago Mayor Lori Lightfoot want to argue that is because you are “White” and make this issue of crime based purely on race. They argue that race, not law, determines a person’s fate. They are pandering to their voter constituency base, not to you.

The law was written specifically by the Black Caucus to address issues of concerns in the Black community. The critics of the law didn’t put a race color to the law. The Black Caucus put that color on the 800-page legislation that was pushed through the General Assembly by Gov. J.B. Pritzker in order to strengthen voter turnout out among minority voters in the six county region.

It was introduced in January 2021 with little fanfare, which is why we didn’t hear about it until only recently, more than 18 months later. And legislators only had hours to read the 800 pages and vote to approve it.

Pritzker called it the Safe-T Act because he understands propaganda. Call a bill to protect criminals the “Safe-T Act” and voters think it is about making law abiding citizens “safe.”

Call it by its real bureaucratic name, the Illinois Safety, Accountability, Fairness and Equity-Today Act, and you recognize that this is about helping people accused of crimes.

Pause to consider that phrase for one moment. “helping people accused of crimes.”

The Rule of Law already helps people who are accused of crimes. But apparently, the Rule of Law isn’t fair. It discriminates against people allegedly on the basis of race and color?

There is nothing “Safe” about the Safe-T Act. It is purely written to make life easier for criminals.

Maybe something that strengthens protections for law abiding citizens by putting the fear of God into the minds of hard core criminals.

What we should do is make it tougher for criminals to be released on bond. Had they done that in December, suspect Malik Perteet would not have been released on cash bail awaiting trial after being charged in the murder of an 11-year-old child.

Foxx refused police demands that he be denied bail and he was released on home monitoring.

So, Perteet went out and is accused of murdering a 17-year-old two months later.

Most major media did not report on Perteet’s rebound crime and when FOX TV reported it, it was ridiculed as fueling racism. Perteet is African American. And so where his two victims.

According to CWB Chicago, Perteet is the 60th person accused of killing, trying to kill, or shooting someone in Chicago this year while awaiting trial for a felony. A total of 92 victims are involved in those crimes.

I bet I know who Perteet is going to vote for on November 8.

Who are you going to vote for?

Presidential Inn is shut down News

Comments (6) on “Illinois needs to repeal the Safe-T Act”