Diamond Evans was given an option by Coach Tim Racki before Nazareth’s first-round Class 7A playoff game.

The star receiver’s grandfather, Wesley Ivy, died in Missouri on Friday. Racki told Evans he could grieve with his family, watch the game, play in a few plays, “or business as usual.”

“He said his grandfather would want him to play, and, boy, did he ever,” Racki said.

Evans caught touchdown passes of 9, 65 and 20 yards to help Nazareth (9-1) roll past Andrew 42-11 in a Class 7A playoff opener in La Grange Park Saturday afternoon. A fourth TD was wiped out by a penalty.

Evans said he played for his grandfather: “He supported me a lot. We’re pushing through it.”

Evans was just part of the Nazareth story. 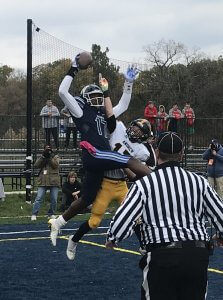 The first of Diamond Evans’ three touchdowns was this leaping grab over Andrew’s Noah O’Connor in Saturday’s 42-11 rout. Nazareth plays Hersey next. Photo by Steve Metsch.

All-purpose Michael Love caught touchdown passes of 50 and 58 yards. And Nazareth held Andrew to one late touchdown, one field goal and a safety.

The Roadrunners scored on their first possession, driving 42 yards in 1:45, capped with a leaping 9-yard touchdown grab by Evans.

Two minutes and two seconds later, McCarthy scampered in from 9 yards out for a 14-0 lead.

An Andrew field goal of 29 yards by Peyton Benes seemed to fire up the Roadrunners, who scored three touchdowns in less than five minutes to ice the outcome.

On first-and-10 at Nazareth’s 35-yard line, McCarthy hit Evans on a lovely fade for a 21-3 lead with 4:53 left in the first half. That was Evans’ favorite “because the cornerback was talking a lot.”

Andrew’s next possession ended when Ryan Fitzgerald fumbled and Nazareth’s Riley Theobald recovered. Five plays later, with the ball at the 50. McCarthy found Love around the 30. Love caught the ball with one hand, then eluded two defenders for a 28-3 lead with 1:17 left.

“That’s what Michael does. He does that in practice. We get spoiled. It’s not even a big deal anymore,” Racki said of the one-handed snare.

Love said, “I have big hands, so it’s kind of natural.”

Andrew’s ensuing drive was snuffed when Marcus A. Griffin sacked quarterback Tom Schiller. Andrew punted. On Nazareth’s first play from its own 42, McCarthy found Love for a 58-yard scoring play and a 35-3 lead with 19.9 seconds left in the first half.

“(McCarthy) is such a smart quarterback. I trust his arm,” Love said. 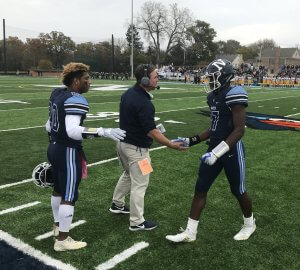 “That’s what he does. The thing is, he’s got room to improve and he’s the first one to say that. He’s got some solid leadership around him.,” Racki said of his quarterback who is already being courted by Division One college programs.

“He doesn’t have to feel the pressure. That helps his performance a lot. He sat in that pocket forever. The line was the MVP along with Diamond. They were playing for Diamond. They knew how crushed he was,” Racki said.

“This was the toughest first-round opponent that we’ve had in a while,” Racki said. “Their quarterback is good. Coach is turning that program around. We did not take them lightly at all.”

Andrew Coach Adam Lewandowski said: “I appreciate Tim saying that. We knew we had to play a perfect game to have a shot. Nazareth is going to have a lot of success in the playoffs.”

Love, who played on last year’s team that lost the state title game, said the goal is to win state, adding “it’s the last ride.”

Suspect in Bridgeview car and child theft arrested, charged and to appear in bond court this morning breaking news
Principals under fire in SD 103 News