The Chicago Wolves opened their 27th season with a 3-1 American Hockey League victory over the Grand Rapids Griffins on Friday night at Triphahn Center.

Forwards Tommy Novak and Seth Jarvis and defenseman Cavan Fitzgerald scored for the Wolves — the 19-year-old Jarvis tallying the game-winner in his first professional game — while 19-year-old forward Phil Tomasino added two assists in his first game as Chicago (1-0-0-0) captured its seventh home opener in the last nine years.

Goaltender Antoine Bibeau (1-0-0) rejected 22 shots to earn the win as the Wolves played for the first time since March 8, 2020, due to the COVID-19 pandemic.

“It’s a very young group, but with some experienced players,” said Wolves head coach Ryan Warsofsky. “I think they were really excited after a long time off. We were surprised at the pace and the physicality — just the coaching staff talking about it after the first period. It’s definitely a positive.” 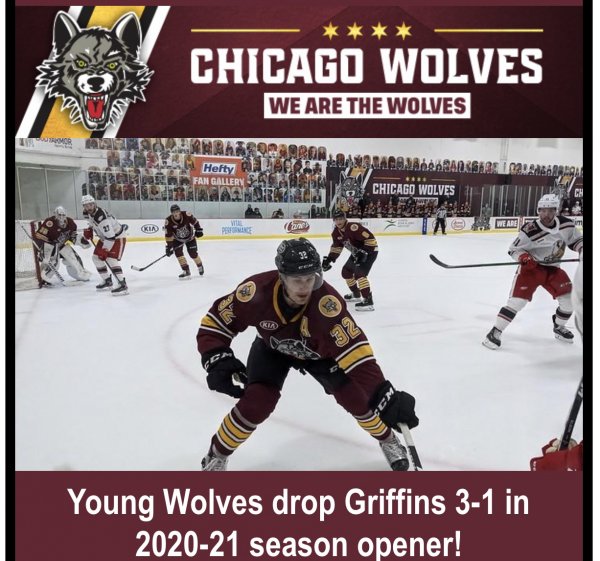 The Griffins (0-1-0-0) scored first at 7:38 as veteran Kris Criscuolo capitalized on the visitors’ first power play of the season. He went to the net and knocked home a pass from Riley Barber.

The Wolves answered at 18:26 of the first as defenseman Cavan Fitzgerald jumped into the rush and fired after flying down the left wing. Goaltender Pat Nagle (26 saves) made the initial stop, but Novak flew in for an acrobatic rebound and the 1-1 tie.

Chicago took its first lead at 2:09 of the second on Jarvis’ power-play goal. Tomasino, Dominik Bokk and Jarvis — three NHL first-round picks making their North American professional debuts — connected on a perfect tic-tac-toe to find Jarvis open in the slot.

“I’ve been waiting for this day for a long time now,” Jarvis said. “It was great getting my feet wet and, obviously, scoring is going to make it pretty memorable, I think. On the power play, we have a bunch of young guys and it’s nice to do it with them and make plays with them.”

Fitzgerald gave the Wolves some breathing room at the 13:01 mark when he blasted a slap shot through traffic from the top of the left circle.

The Wolves face a quick turnaround as they hit the road for a 3 p.m. game Saturday against the Rockford IceHogs. The Wolves also added a 2 p.m. home game versus the IceHogs at 2 p.m. Tuesday, Jan. 9.