The Lyons Mustangs Athletic Club will soon hold its chicken BBQ, an annual tradition in the village now in its 64thyear.

And, for the 64thstraight year, a large turnout is expected, Mustangs President Ed Metz said.

How big? Well, 600 chickens will be prepared rotisserie style for the event. Each dinner is a half-chicken. Do the math. That adds up to at least 1,200 people who will dine well.

“We have 25 chickens on each pole. It takes three guys to carry the poles when they pick them up. We used charcoal in the fire pit, and a machine slowly turns the poles to cook the chickens,” Metz said. 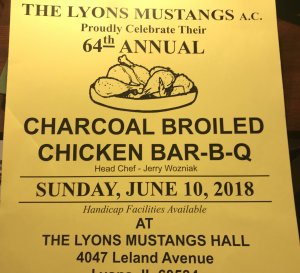 Dinner tickets are $8 per person and include all the fixings. Hot dogs will be available for children, along with games.

There will be a beer truck along with a cash bar serving hard liquor, said Metz, who is in his 20thyear with the Mustangs.

The club sponsors a team in the Lyons McCook Little League each year “and we’ve done our part with other charitable things,” Metz said.

The event raises funds to help pay for upkeep of the hall, and for causes like local food pantries.

Mustang club members are in charge of cooking the chickens under the direction of head chef Jerry Wozniak, Metz said.

There will be door prizes and raffles.

Metz discussed plans for the event at the May 9 meeting of the Lyons McCook Business Association, held at D. Thai Restaurant, 7221 Ogden Ave., Lyons.

He asked business people in attendance to donate items for the raffle in the form of goods or services, making sure they attach a business card to any item. All donations, he said, are tax deductible.