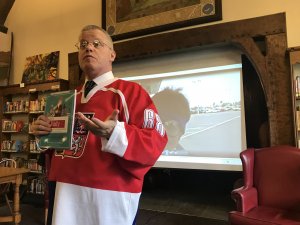 The son of the late Judy Baar Topinka is a hoping a book he’s written about this mother can teach valuable lessons to our youths.

Joseph Baar Topinka, 50, who now lives in Texas and teaches employment law at Texas State University, has written “Just Judy,” an entertaining and interesting 96-page book about his mom, one of Illinois’ most beloved politicians.

He presented a brief videotape about his mother’s life, and then chatted with people at a book signing May 12 at the Riverside Public Library.

Judy Baar Topinka lived much of her life in Riverside and it was there that she began her career in politics. She certainly had a loyal following, losing only one election.

“Somebody had to tell the story. And what better person than her son?” he said. “Her life has a lot of great lessons we can all learn from, especially young people.”

The colorful book is designed to act as a study guide for middle-school students, he said, but at the book signing, all the people there were adults.

James Connelly, of Chicago, said Judy was popular because “she never forgot her roots and what people were about.”

“Wouldn’t you say we need a little bit more Judy? She was the most popular Republican in the state. Even Democrats liked her,” Connelly said.

Judy Baar Topinka was all about four core issues, her son said: “Good government, civility, ethics and love of heritage, which is one reason I’m wearing this,” he said.

He wore a bright red Czech Republic hockey jersey bearing the name of legendary NHL star Jaromir Jagr. His mother was proud of her Bohemian and Czech roots, he said.

“This book I about her life and really about how she loved everybody and accepted everybody how they were,” he said.

“It didn’t matter if you were Hispanic, African American, green, yellow, blue, vegetarian, transsexual, gay, lesbian, Czech, Polish, you were just a person. Honestly, if she could have done things without being affiliated with a party, I suspect she would have been on her own,” he said.

A former reporter who earned her degree at Northwestern University’s prestigious Medill School of Journalism, she worked for several local newspapers before she decided to try her hand at politics.

Judy Baar Topinka rose through the political ranks. After the House, she became a State Senator, leaving that to win election as state treasurer. In 2006, she was the Republican candidate for governor, losing to the incumbent Rod Blagojevich. She got 39 percent of the vote to his 50.

Four years later, she  was back, elected state comptroller, becoming the first and only woman in Illinois politics to have held two statewide offices, her son noted.

The book is an easy read. It includes letters from those who knew her well, people like Craig Dellimore, political editor at WBBM Newsradio, who wrote that she taught others to “not be afraid to change careers in life.”

On the book’s cover, President Obama writes: “She was blunt, pragmatic, unfailingly cheerful and energetic, and always willing to put politics aside to find common-sense solutions that made a difference for the people of Illinois.”

Her son says “my goal is not to make money, but to promote her legacy. Her legacy is teaching her core issues to young people so when they grow up they can bring Illinois into a golden age again.”

You can order copies of the book ($16.95) at Hilton Publishing, at  www.judybaartopinka.org, or at Amazon.