LED to save money

Township of Lyons to install new lighting at HQ

The Lyons Township headquarters, 6404 Joliet Road, Countryside, is getting new lighting that is expected to save on electric bills.

The building will have all LED lighting, Township Supervisor Christopher Getty said.

“We had a free assessment from ComEd to check all the lights in the building. We’ll obviously save on the costs of electricity and the cost of replacing bulbs,” Getty said.

A company named March1, based in Willow Springs, will be paid $20,534 to replace all the light fixtures in and out of the building with LED lighting.

The savings are expected to be “a little over 40 percent,” said Jerry Marchione who owns the company with his wife, Tarryne Marchione.

“We’re members of a ComEd public utility program run by the Illinois Commerce Commission. It’s our job to come in and do the work,” he said.

The project will probably take about 12 days to complete, he said.

LED lighting, he said, run cooler than traditional light bulbs and will provide “a huge difference in temperature.”

He noted that some downtown high rises have experienced increased higher heating bills in the winter since they no longer had heat coming off incandescent lighting.

“I was skeptical for a while, but I think they’ve come a long way,” Marchione said of the LED lights, which, he noted, are less expensive then when they debuted.

No rewiring is needed for the project, he said. “Mechanically, the building checked out.”

The township trustees authorized Getty to enter into an agreement with the Save Wave Energy Company to provide electricity to township-owned buildings.

“We were with a company or two like this before, and we went back to ComEd in 2017. This would be for 36 months,” Getty said of the agreement. 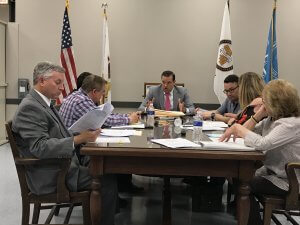 In other business, trustees approved a grant request of $12,500 for the Greater Chicago Food Depository to continue the 12 monthly distribution sites in Hodgkins, Justice and Summit, and adding another in Lyons.

The new site will be the Lyons Village Hall, where food will be distributed three times a year, said Getty, who is also mayor of Lyons.

“This is $2,500 more than the previous year. The Community Memorial Foundation is also increasing its share,” Getty said.

One is to Lyons Mustangs Athletic Club, a charitable organization; another is to the American Cancer Society for it’s Relay for Life on June 9 at Lyons Township High School’s south campus; and a third is to the La Grange Babe Ruth Baseball League.

“This is the first time we’re funding them,” Getty said of the baseball league for boys and girls ages 13 to 18.

At the suggestion of trustee Thomas Garrette, Jr., the township increased its planned donation of $200 to $500 for “Fight for Frank.”

The fundraiser is for Frank Colonna, a resident of unincorporated Lyon Township. A senior at Lyons Township High School, he was diagnosed with leukemia in May 2017, according to the fundraising site.

The trustees also approved a contract to pay Duck’s Landscaping $177 per month for grass management. It’s the same rate paid in 2017, Getty said.