The popular Taste of Orland Park opened this weekend despite rising cases of confirmed COVID-19 cases reported for Orland Park by the Illinois Department of Public Health. The confirmed cases of Coronavirus have increased 47.4 percent in the past 30 days. Orland Park Mayor Keith Pekau, who faces re-election in the Spring, asserts Taste of Orland Park will be carefully managed with controlled attendance, but trustees predicted massive financial loses and questioned why the village pushed ahead in the COVID-19 environment rather than rescheduling a bigger festival next year.

The number of confirmed coronavirus COVID-19 cases in the Village of Orland Park have increased nearly 50 percent during the past month portending an alarming rate that many believe is a reflection of the village’s lax attitude towards the virus pandemic.

Despite the steadily rising confirmed cases, Mayor Keith Pekau has argued that they are “asymptomatic” and that the only cases that count are  the ones in which patients end up in a local hospital. As a result, Pekau has pushed ahead with an aggressive program of public events including refusing to cancel this year’s Taste of Orland festival which began July 31, 2020 and will continue through August 2.

Data from the Illinois Department of Public Health shows Orland Park has recorded as of August 1,  781 confirmed cases of coronavirus. That is compared to 530 confirmed cases reported by the IDPH on July 1, 2020. It is an increase of 251 cases or 47.4 percent change.

Pekau has argued the increase in COVID-19 testing is driving up the infection numbers, that suggests that if people were not being tested, the numbers would be lower. (Click here to view Mayor Pekau’s video report from July 29, 2020 at the 02:30 video time stamp.)

Pekau argues in the video that the “state positivity rate” is 1.4 percent and applauded residents [13.07 video time stamp] because the Orland Park positivity rate is “only 1.2 percent.” Pekau has also challenged the state’s reporting process asserting that the way they collect data “changes” making their reporting “a bit challenging.” (Click here to see the mayor’s comments at the July 20, 2020 meeting timestamp 36:00)

Village officials argued that past Taste of Orland Park festivals have attracted an average of 10,000 participants per day — citing a total of 40,000 attendees during past events which lasted four-days — this year’s festival is limited to three days and a maximum of 20 percent capacity, or about 2,400 attendees “at one time.” When the 2,400 person capacity is reached, the public will be placed in a “social distancing” waiting line and only allowed in as people depart.

Senior Orland Park Trustee Jim Dodge voted against scheduling the 2020 Taste of Orland this year asking at the last meeting, “why are we doing this?” as the coronavirus pandemic continues unabated.

Taste of Orland costs the village about $200,000. “This year’s taste with limited attendance is not likely to cover those costs,” he told the board recently.

Only 10 restaurants are participating compared to 19 in 2019 and 23 in 2018. The 10 restaurants participating in this year’s Taste are: Barraco’s Pizza, Beggars Pizza, Mo’s Chinese Kitchen, Nothing Bundt Cakes, Papa Joe’s Italian Restaurant, Pita Pita, Pueblito, Square Celt Ale, Smallcakes, and Tradycja according to the Village website.

Trustee Dan Calandriello also criticized the scheduling of the Taste of Orland Park given the COVID-19 threat, saying, “How much money are we going to be losing? … I think we are going to lose our shirt, and our shoes and our everything on this. And just for something to feel good I don’t think is the right thing to do.”

Dodge predicted on his Facebook Page Friday (July 31, 2020) that the taxpayers will lose about $100,000 in moving forward with this year’s Taste of Orland Park.

“Taste of Orland 2020 will be shadow of what it was. That’s why I recommended we cancel it, save the money and make next year’s bigger and better. The Mayor and the Politics over People party think otherwise,” Dodge wrote on his Facebook page.

“The Village has ‘tort immunity’ so you won’t have much luck in court suing us. I’ve encouraged everyone to read the ‘reopening plan’ for Orland. The very FIRST page was written by our lawyers … The open legal questions about the Governor’s orders is NOT a settled matter. It’s still in court. The businesses must be very mindful of what their insurance companies might do, given those open legal questions in a pandemic,” Dodge cautioned.

Dodge asked the obvious question: “If you were a Village staff member or Taste Vendor, would you want to work? Round numbers, this will lose about 100 grand. And by the way, village sales tax revenues are down. We are living thru a modern equivalent of the 1918 Pandemic, The Great Depression of the 1930’s and the social unrest of the 1960’s, all at once. The best option would have been to make bigger plans for next year.”

Attendees at this year’s Taste report that attendance is down significantly. The argument that attendance can be managed at 2,400 at one time presume that the average of 10,000 people who attend the Taste do so throughout the day but in fact, the majority of attendees at past Tastes show up in the late afternoon and probably exceed 5,000. People are complaining on social media about long lines and low attendance.

Dodge who served as Village Clerk from 1989 until 1996, and as Trustee since 1996, has an excellent understanding of village finances and a keen sense of the challenges that face the village in the pandemic.

Pekau, a former landscaper who is paid $150,000 a year in salary as the village’s part time mayor, completes his first term in office in the Spring.

Video from the first day of Taste of Orland Park shows that most attendees are not wearing facemarks and that attendance is extremely low.

Check out the Political Pundit for August 2, 2020

One outloud laugh at a time sometimes isn’t enough LOL 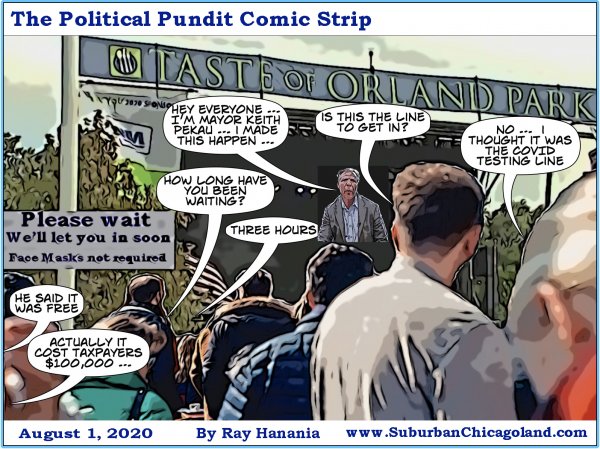