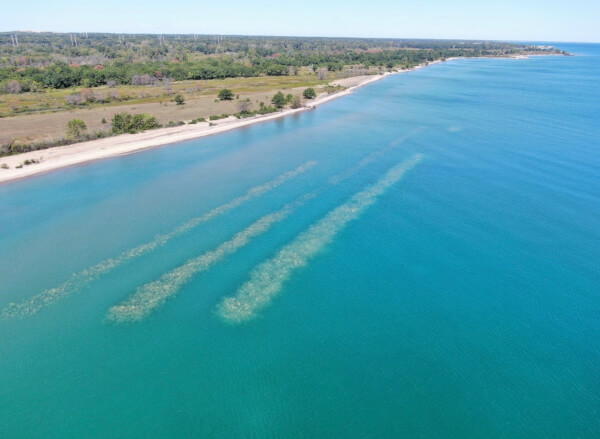 Two ground-breaking projects underway at Illinois Beach State Park will help protect precious shoreline from erosion caused by Lake Michigan waves and inform future decisions about how to blunt the effects of erosion and climate change, Governor JB Pritzker, the Illinois Department of Natural Resources and the Illinois Capital Development Board announced today.

Illinois Beach State Park in Lake County, home to unique prairie and wetland habitat and a beloved local and regional recreational draw, features the last remaining natural shoreline in the state. However, the shore is constantly battered by Lake Michigan waves, making it a priority for preservation and mitigation efforts.

Some parts of the park’s coastline have receded by as much as 100 feet in one year. Aerial photos and maps show how the shoreline, roads and dune ecosystems have been drastically altered; visitors can see evidence of some of the damage in person.

“Illinois’ lakefronts are a national treasure and one of our greatest natural resources, and it’s essential that we preserve these spaces for future generations to love and learn from,” Governor Pritzker said.

“This historic, ambitious project from IDNR and its partners is a commitment that Illinois will continue to tackle the effects of the climate crisis head on and work to build a cleaner, more sustainable Illinois for everyone to enjoy.”

The larger of the two projects is construction of a revolutionary system to preserve 2.2 miles of Illinois Beach State Park shoreline. This is a $73 million project, which is believed to be the largest capital project in the history of the Illinois Department of Natural Resources (IDNR). Funding for the project was secured by the Capital Development Board (CDB) and made possible through the historic Rebuild Illinois capital plan. Construction is set to begin in spring 2023.

“It is a priority for IDNR and the State of Illinois to do everything we can to protect the precious public shoreline at Illinois Beach and the native species that live there before they both vanish forever,” said IDNR Director Colleen Callahan.

Rather than stopping erosion by building walls or high-profile coastal structures, the design seeks to guide and direct the movement of the sand instead of simply trying to prevent its movement. The approach uses creatively shaped and formulated islands and submerged reef structures, positioned out in the lake rather than built directly along the shore. These structures serve multiple roles, blocking and reducing the erosive force of incoming waves, redirecting nearshore currents, and providing a new home to aquatic and avian species that live along the shoreline.

The unique solution is the result of more than a year of computer simulations and intense physical modeling to explore how Lake Michigan waves would behave passing around the structures and ultimately transform the shoreline. To test and verify design performance, consultants built a scale model in a giant hydraulic laboratory in the United Kingdom – larger than a soccer field – to replicate conditions along 11,000 feet of Lake Michigan shoreline.

More than 100 variations of possible shoreline solutions were tested until an effective solution was found. The lessons learned through this trailblazing effort set new standards and guidelines for how living shoreline design can manage highly erosive wave forces while remaining as natural as possible.

The completed project will utilize about 250,000 tons of rock fill and armor material, creating 22 submerged and low emergent stone breakwaters covering 12.2 acres of lakebed and renourishing the shoreline with nearly 430,000 cubic yards of sand.

This goal of this massive effort is to protect critical ecological habitats like the 21st Street wetlands and the North Dunes Nature Preserve Trails, as well as vulnerable infrastructure like the Lake County intake plant.

Visitors will not see much of the protective structures because they will be underwater. Protecting the lake views and natural character of Illinois Beach State Park were a priority.

“This approach reflects a broader change in the way shorelines are being protected around the globe,” Callahan said. “Our project explores new ground and sets new standards for what living shorelines can be and what we can achieve in the Great Lakes.”

The Illinois Capital Development Board (CDB) will oversee the project’s design and construction in accordance with the protocol for state-appropriated projects.

‘Rubble ridges’ pilot project could become model for other states

The second project involves the installation of stone “rubble ridges” in Lake Michigan off the southern end of the Illinois Beach State Park coastline. This pilot project is an example of an innovative design focused on development of lower impact and less expensive measures that can protect shoreline.

During the summer of 2021, crews finished constructing three 750-foot-long rubble ridges in the shallow water of Lake Michigan about 500 feet offshore of Illinois Beach State Park. Built of more than 10,000 tons of stones that were placed by a crane, the ridges are intended to work in concert to lessen storm wave impact and protect the eroding beach and unique ecosystem in the dunes.

The ridges are submerged in the water to preserve the view from the shoreline. They also create fish habitat by offering small, protected pore spaces within the structures – in effect, protecting habitat with habitat

“This project represents an important step toward the future of Great Lakes coastal resiliency,” said Ania Bayers, natural resources manager of the IDNR Coastal Management Program. “It’s also a testament to the importance of interagency collaboration, a reliance on good science, and innovative design to preserve the most basic and important qualities of the places Illinoisans love.”

Each year, winter wreaks havoc on Lake Michigan communities as waves and ice pummel the coast. More recently, storms combined with record-high lake levels have been especially damaging to the shoreline.

“From 2012 to 2020, a period coinciding with record-low to near record-high lake levels, the north unit of the park alone lost an estimated 670,570 cubic yards of sediment,” said Robin Mattheus, coastal geologist of the Illinois State Geological Survey. “To help put that into number into perspective, that’s enough to fill about 50,000 dump trucks.”

Coastal Management Program staff began working three years ago with community stakeholders, scientists and a team of design researchers to better understand changes to the coastal landscape and develop a solution to the erosion problem.

The resulting rubble ridges will be carefully monitored by scientists during the next five years with support from the National Oceanic and Atmospheric Agency (NOAA). Their study will help inform coastal protection across the Great Lakes and may lead to better in-water habitat and more affordable shoreline protection alternatives.

Construction of the rubble ridges is anticipated to cost an estimated $1.5 million.

Monitoring of the project is performed by staff from ISGS and the Illinois Natural History Survey, who look for changes in the landscape, lakebed, area hydrodynamics, and habitat usage through an array of instruments and techniques. One such technique uses eight monitoring “cages” that were designed and fabricated to be placed on the surrounding lakebed, collecting hydrodynamic data from waves as they pass through the project area.