Trelenberg scores 14 of his 20 in fourth quarter

Clinging to a one-point lead with 4:57 remaining in the game, Nazareth Coach Sean Pearson told his players in a time-out “we have to take care of the ball.”

“We took care of it in the last five minutes,” Pearson said after the game. “It’s important. We’ve been in a couple games earlier in the season, (when at) about the four and a half, the three-minute mark, we seem to get that turnover bug.”

Nazareth outscored Northridge Prep 14-9 after his reminder and held on Feb. 17 for a 49-43 victory in La Grange Park.

Better ball control and the play of junior Dom Trelenberg, who scored 14 of his game-high 20 points in the fourth quarter, paved the way.

“We started playing as a team finally, and we clicked,” Trelenberg said. 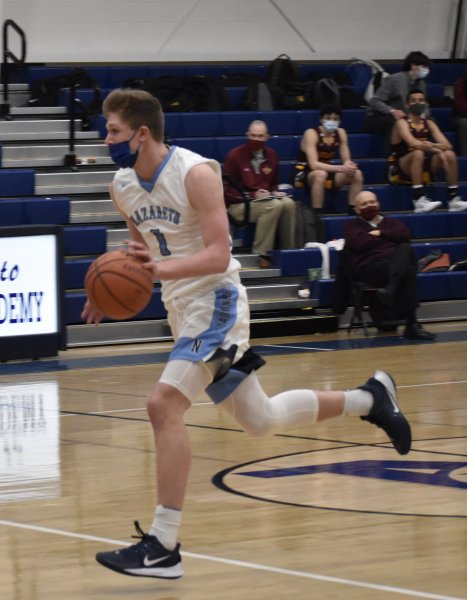 Nazareth junior Dom Trelenberg races down the court for two of the 14 points he scored in the fourth quarter of a Feb. 17 win over Northridge Prep. Photo by Steve Metsch.

Leading 39-38, Nazareth stole the ball with just under three minutes left. The 6-foot-5 Trelenberg then raced in from half-court and scored a layup for a 41-38 lead.

Sophomore guard Andrew Cullotta, who scored 11 points, then stole the ball and passed to Trelenberg for another layup and a 43-38 lead.

After a Northridge Prep free throw and a third steal, this time by senior guard Noah Soenen, Trelenberg scored again. He was fouled and sank the free throw for a commanding 46-39 lead with 1:29 left.

“We came out in the second half a little flat, but in the fourth quarter we kind of turned it on and sealed the deal,” Soenen said. “It just feels good to get that first win.”

Led by sharpshooter Andrew Brockmeier, who scored 10 of his team-high 17 in the third quarter, Northridge Prep led 32-29 heading into the fourth. Nazareth had led 26-17 at the half.

Soenen, who defended Brockmeier, held him to two points in the final quarter: “We just focused on staying on him, not letting him get the open shots.”

“They stick with their game plan, and they don’t break from that regardless of what’s going on in the game,” Pearson said. “That’s a great trait to have.”

Coach Will Rey, who has a 243-128 record at Northridge Prep, said his team allowed too many easy baskets early.

“We tried to correct some of those things at halftime, but we still have to do a better job,” Rey said. “It’s an attention to detail issue right now.”

“Very good player,” Rey said. “Excellent. Outstanding. He can score. He can rebound. He defends. … He’s a very talented guy. He plays a lot bigger.”

On Feb. 13, assistant varsity coach Scott Borgumil, 52, died of a heart attack. The team attended Brogumil’s wake at an Elmhurst funeral home before the game.

The team has dedicated this season to Brogumil and to Rey’s wife Diane, who died in August after a six-year fight against cancer.

“(Brogumil was) a great man, one of the most genuine and decent human beings I’ve ever met and had the honor to work alongside,” Rey said.

Borgumil formerly was varsity boys basketball coach for 11 seasons at Libertyville, where he still was a counselor.

“He was a passionate and caring educator who saw the rightful place and purpose of sports in the lives of young people,” Rey said. “Terrific coach, too.”

“(Brogumil) was a huge asset to our program,” Rey said. “We will miss him dearly.”

A prayer for Brogumil was said before the game.