The annual Brew Moon Beer & Band Festival, set for next month, is getting some assistance from the Township of Lyons.

The township’s board of trustees, by unanimous vote, approved giving the organizers $750 to help make the event a success.

The board met at the township building in Countryside on Sept. 11.

The festival is scheduled for Oct. 20 at the McCook Athletic Expo (The MAX) 4750 S. Vernon Ave., McCook.

“This annual event has been going on for quite some time,” Township Supervisor Christopher Getty said. 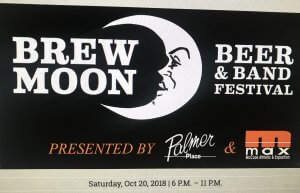 “We have been a sponsor of this event all the way through, and I recommend that we continue to sponsor this event,” Getty told trustees.

The event features tastings of craft, micro and imported beers from 6 to 9:30 p.m. Those tickets are $50 in advance and $55 at the door. You can enjoy unlimited 2-ounce samples.

General admission tickets which don’t include tastings cost $7 in advance, $10 at the door.

Sixteen Candles will play hit songs from the 1980s from 9:30 to 11 p.m. Visit www.brewmoonfest.com for more information.

In other business, Trustee Timothy Sprague reported that the summer intern jobs program was a success. The program ended Aug. 31.

“Forty-four interns were placed 19 different agencies and three offices in the township.

“The feedback was very positive. There were at least two (interns) that have been offered (permanent) positions,” Sprague said. “It is great.”

The township’s Coaltion for a Drug-Free Lyons Township will host a meeting about vaping.

Nearly one of every three 12-graders reported using some kind of vaping device in the past year,’ Melka said.

“They’re like e-cigarettes. Some, instead of nicotine, they have THC (from marijuana) if you order them on-line from Oregon or Washington,” Melka said. “It’s epidemic, and there are all sorts of problems with it.”

The board also unanimously approved deeming a 2010 senior transportation bus as “surplus property” in order to sell it.