Birthday girl has the blues

There’s no better way for Tomiko Dixon to celebrate her birthday than to play the blues music she loves at a new festival.

The site is on the south side of Ogden Avenue, just west of the Des Plaines River. There’s plenty of parking, and two stages.

Dixon will perform with Willie Dixon’s Original Chicago Blues All-Star Band on the Main Stage at from 7:35 to 9:05 p.m. Saturday.

During a phone interview on Sept. 16 from steamy Mississippi, Dixon said she’s thrilled to have helped organize the festival.

Dixon “made phone calls and told everyone we need some help to kick this thing off in Lyons so we can have another blues outlet in Illinois and the Chicagoland area. It  didn’t hurt that it was my birthday as well.”

“I think I’m the first blues girl to ever have a festival for her birthday. So, it’s pretty special. I’m grateful to the blues society and the village of Lyons for backing us,” she said. 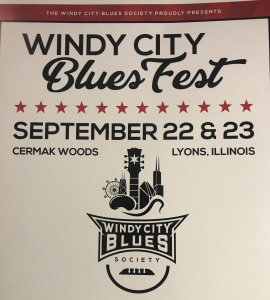 There are 40 acts scheduled for the two-day festival, in addition to the Chicago Blues Challenge, she said.

The challenge is set for 12:30 to 7 p.m. Sunday on the Backwoods Stage, and the Windy City Blues Society will send the winner to the international challenge in Memphis. Contestants are judged on five categories.

Dixon has the blues in her blood. She was 13 when her grandfather, blues legend Willie Dixon, passed away in 1992.

“I listened to him practice with at home with his friends, him and (the late) Koko (Taylor). What I learned from him was to make sure I understood the music business. That and the showmanship,” she said.

“He was a hell of a businessman, an innovator, (and) one of the greatest composers and songwriters of all time,” Dixon said.

Dixon has released four albums and three singles. Dixon writes her own music, “and I perform my grandfather’s music as a tribute.”

Regarding writing her own music, she often leans on “something that happened in my life or just a situation I found funny and made me think ‘that’s a song right there.’ But anything can be a trigger.”

Dixon called the location “perfect,” noting the aquatic park  can be used for kids and adults who may need to cool off. “I know it’s going to be a great thing for the village of Lyons,” Dixon added.

Madlener noted that alumni of Southern Illinois University “will be tripping over themselves to get here to see Tawl Paul.” The Carbondale legend performs with the Dead or Alives on the Backwoods Stage from 7:15 to 9:30 p.m. Saturday.

“It’s the Tawl Paul experience, the memory of being a college student, getting drunk and listening to this old fart up there singing,” Madlener said laughing.

Dixon is looking forward not only to performing but to enjoying other musicians.

“I definitely want to see The Jamiah Rodgers Band (at 1:40 p.m. Saturday) because I haven’t had a chance to see him perform. Another act I want to see is Nellie ‘Tiger’ Travis. I grew up with Nellie. She’s like an aunt to me. It will be interesting to sit in the audience.”

“I want to see Lurrie Bell and it’s always a joy to see the Mike Wheeler Band because they get down. They play all types of music and they do it in a blues way,” Dixon said.
Wheeler, Travis and Bell follow her on the main stage from  9:20 to 11:15 p.m. Saturday.

Madlener, a revenue investigator for the city of Chicago in his day job, is excited the festival is finally happening after a few years of discussion.

“Tomiko has been a big help to us putting this together,” Madlener said. “It’s been a learning experience. We’re doing our best to make a great event.”

Why does Madlener love the blues?

“It’s the beat and rhythm, but it’s the message of triumph over adversity, of overcoming your demons and going against all odds,” he said.

Tickets are $10, and parking is $10. Food vendors will be there, along with plenty of cold libations. Non-profit blues organizations will have booths.