An off-duty Cicero firefighter who happened to be driving past a burning building saved the lives of two Lyons men.

Lyons Fire Chief Gordon Nord, Jr., said the two men “would be dead if it wasn’t for him because as he brought them out, our engine was pulling up. It was a blessing he was driving down our street.”

Brian Kulaga, a Cicero Fire Department lieutenant, was driving west on Ogden Avenue around 10 a.m. Feb. 19, en route to shopping for groceries for the firehouse. That’s when he noticed smoke and flames coming from the second floor above Waterworks Pizza & Tavern, 7815 Ogden Ave.

“As I got close to the building, I realized it was black smoke. Bad,” Kulaga said.

Kulaga pulled over. He ran to the tavern and banged on the locked front door.

“A couple three workers were inside,” Kulaga said. “They said, ‘We’re not open.’ I said, ‘Your building’s on fire.’ (A woman working there) looked up saw the smoke and fire coming out of the front windows and started screaming.”

Kulaga asked if people were upstairs. Workers said two men lived upstairs, and showed him the stairs’ location. Kulaga ran up and “found the first guy walking around in the smoke.” 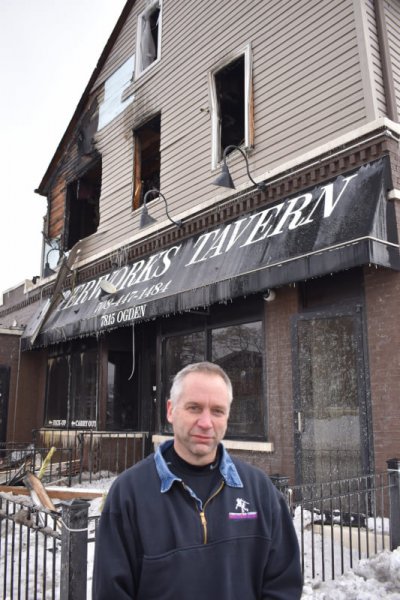 Cicero Fire Lt. Brian Kulaga stands outside the building where he saved the lives of two Lyons men who resided on the second floor. Photo by Steve Metsch.

Kulaga grabbed the man and walked him down the stairs to safety. That man told Kulaga he thought the other resident was still upstairs.

“The lady from the bar gave me nice directions on how the apartment is laid out,” Kulaga said.

Kulaga ran back up the stairs and began calling out for the man.

“At that point, there was smoke to the floor,” he said.

“I decided to make a crawl for him,” he said. “I got on the floor, like we do. I crawled. I couldn’t see anything. Just crawled until I found him. Pulled him to the floor and pulled him out.”

One man was taken to Loyola Medical Center in Maywood, and the other to MacNeal Hospital in Berwyn, Nord said.

Asked how he could breathe in the thick smoke, Kulaga said, “We wear air packs and I was really wishing I had one because it’s not fun breathing that stuff.”

A firefighter for 31 years, Kulaga downplayed his heroics: “Any firefighter would have done the same thing.”

Kulaga, 54, grew up in Cicero. He and his wife, Louise, a science teacher and coach at Gurrie Middle School in La Grange, live in Riverside.

Several towns assisted Lyons dousing the flames, Nord said. The cause is under investigation. There is water damage to Waterworks, which will be closed a while, Nord said.

“Buildings can always be rebuilt,” Nord said. “Businesses can always re-open. But lives? If you lose your life, you’re done.”

“Two people are still alive because of this man,” Nord said. “He crawled in with no protective gear, no regard for his life at all. He went in for the people. A true fireman right here. He’s an honor to the profession.”

Ever the professional, Kulaga did complete running his errand.

After he saved two men, after he helped Lyons firefighters with hose lines, Kulaga climbed back into his vehicle.

He drove to Broadview and went grocery shopping for his fellow firefighters at Target, where he apologized to people for his messy clothes and smelling of smoke. 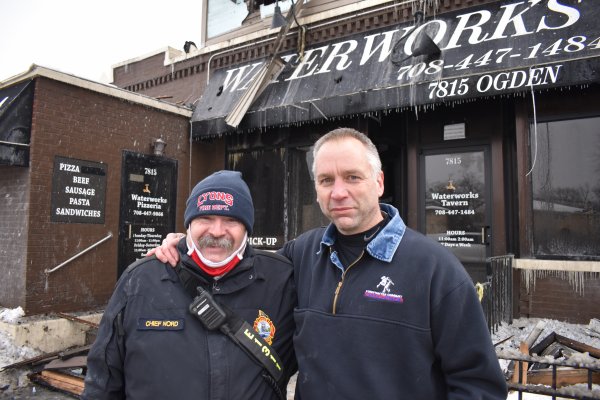 Waterworks owner Dawn Paganelli has vowed that the popular pizzeria and tavern will reopen. Paganelli, who has owned Waterworks for 10 years, is asking for patience from loyal customers.

Now, she is busy working with her insurance company regarding the cleanup and needed repairs.

She was thankful for Kulaga’s heroics: “We were very fortunate he was driving by when he did.”

Paganelli thanked firefighters who rushed to the scene.

“The fire department did a fantastic job of minimizing damage to the building,” she said.

“The fire was limited to upstairs,” Paganelli said. “The kitchen is fully intact. Basically, everything needs to be cleanup up really well and, of course, we have to throw out all our food.”

“Right now, it’s a lot of work,” she said of the fire’s aftermath. “But we’ll get there. My job right now is to make sure my employees get back to work as quickly and as safely as possible.”

As soon as the health department gives the okay, Waterworks will again be serving meals beneath a tent beside the building, as it has during much of the pandemic, she said.

Paganelli said the bar and interior will be “gutted and rebuilt” because of water and smoke damage.Her husband, Bill Paganelli, owns the building. She rents the first floor from him.