Dental exam in a pandemic

If you have not been to the dentist since the coronavirus pandemic began to wreak havoc on our nation, you are in for a surprise. Dentists are taking many safety precautions for us, for themselves and their staff.

After eight idle weeks, dentists were finally back in business a few weeks ago. With their return, they are taking no chances.

My son Craig and I ventured over to lovely Berwyn and visited the office of our dentist, Dr. James Discipio, on the morning of Tuesday, June 23.

Actually, our visit began the day before when a receptionist called and asked several questions

Had we been coughing? Did we have fever or flu-like symptoms? Any shortness of breath? Any contact with a person infected with COVID-19? Had we been out of the state the past 14 days?

We both answered “no” to four questions. To the “person with COVID-19” question, we replied “not to our knowledge.” Because nobody knows who has it, or who doesn’t have it. It’s a crap shoot. Heck, we could have it. So could you.

Anyhow, after we parked on Stanley Avenue for our 9:45 a.m. appointment, we had to call in. Again, we were asked the same questions. Again, we both replied the same way.

When we got in – guess what? – we heard the same questions, gave the same answers. I don’t see how things could have changed in the minute it took to exit my Sonata and walk the 100 or so feet to the office, but I guess it is safety first, good kids.

Wearing our masks, we  were seated in the waiting room, which was remarkably free of magazines and other patients, “because of the virus” we were told. Then the office manager  took our temperatures by holding a device to our foreheads. Craig’s temp was 99.5, mine was 99.1. “A radio station, it sounds like,” Craig joked.

We were deemed good to go.

I was first. The hygienist wore a clear visor that reminded me of those visors welders wear as she cleaned my teeth. After she was done, Dr. Discipio took a look-see and gave me a good review. Look, Ma, no cavities!

Then I dug out my digital recorder and went into reporter mode. That’s cool. Jim knows what I do for a living and was happy to answer all my questions. 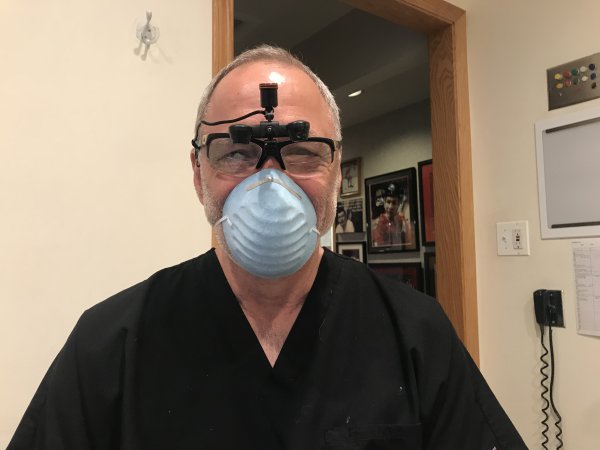 Dr. James Discipio said it’s gone smoothly as dentists and patients have had to adjust to the pandemic. Photo by Steve Metsch.

How has this been for you as a dentist? “It hasn’t changed much. We always wore gloves, masks and (safety) glasses.”

What has changed? “Our ability to have more people in the waiting room, taking temperatures, calling the day before to see if they are sick or not, and telling them to wait in their car until it’s appropriate to come into the waiting room … Another change we’ve seen is the questionnaire, which takes a little time. You could say ‘no’ yesterday and wake up today with the sniffles.”

Where are the magazines? “No more magazines. And all the counters are cleaned. All of our sterilization techniques have stayed the same.”

Are people canceling because of the virus? “A month ago, dentists at that time were the most employed of any business that went back to work. I was able to see emergencies, but we couldn’t see routine patients (during the lockdown). We are a little more concerned with scheduling now.”

What challenges did you face? “During all of this, the information that was coming out. We were getting information from the Illinois State Dental Society, from the Chicago Dental Society, from the Illinois Department of Public Health, from the CDC, from the governor, from the president of Cook County, and each one had a different mindset. To filter all that down to what do we really need to do, what do we have to do, it was changing. As rapidly as we were making a change, something else would come out. These phases. Cook County has its own phase compared to Chicago, compared to the state. You just wish everybody would get on the same page so there’s some continuity to the process.”

What about those patients whose appointments were put on hold? “We spent a week contacting all those patients. That meant I was doing more cleanings than I normally do to catch up. When we came back, we already have patients scheduled throughout the year, but we made it work. It’s going fluidly. I don’t think we’ve ever had anybody not able to come in because of their temperature.”

How is it going in the village? “That’s a whole other ball of wax,” said Discipio, who is also the mayor of La Grange Park. “Not only are we worried about the staff and the workers, but the residents and the businesses. You see (businesses) closing now all over the place … We have two retirement centers that are prime targets (of the virus).”

What about the future? “I don’t know if it’s a bad thing that maybe for the rest of the year that we take precautions. Some people don’t care, they take their masks off in crowds. But once you have (the virus), you can’t give it back.”

With that, he offered me a piping hot cup of coffee, which I enjoyed as we scheduled our next visit for December 22.

Perhaps by then, we’ll all have a better handle on COVID-19. Truth be told, while I do like Jim, I have never been a fan of having sharp metal instruments dragged across my teeth twice a year. Or being told a certain kid needed expensive X-rays. Cha-ching.

But I am hoping our December appointment is not put on hold by the pandemic.

Difference between O’Grady and Pekau is night and day Blogger

Right from the Middle: The Principles of Positive Americanism Bill Lipinski