Best of old and new

Usually, when you’re at a concert and the band says “here’s a new song,” quite a few fans bolt out to get beverages.

That wasn’t the case Thursday night at the intimate Arcada Theatre in St. Charles where Jon Anderson, famously known as the voice of Yes, brought his solo tour.

Anderson isn’t doing a greatest hits tour this go around. He’s got a new solo album, his first in 30 years, and the songs on it are, frankly, pretty good. And those played Thursday don’t sound much like Yes songs. Rather there songs flavored by jazz,  pop and even reggae in the mix. Put them together with the Yes songs Anderson did dust off – often with new treatments – and it made for a very entertaining two hours.

The show opened promptly at 7:30 p.m., so if you’re going to see tonight’s show in Waukegan, get there on time. “Thank you for coming out. Good to see you all again,” Anderson said before the third song. 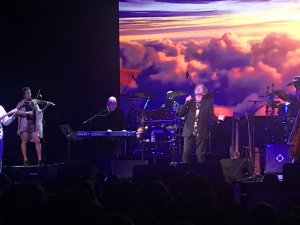 Jon Anderson, right, was in fine form Thursday night at the Arcada Theatre in St. Charles. Photo by Steve Metsch.

Anderson, backed by eight musicians, kicked things off with the song that reignited Yes’ career in the early 1980s, the funky “Owner of  a Lonely Heart.” Then it was back a bit farther to the rocking “Yours Is No Disgrace.” The crowd gave each song an enthusiastic standing ovation.

Anderson, who has been busy in recent years touring with one of two Yes bands – it is a tad confusing – didn’t share any stories from the old days. While I sort of wanted to hear a few, as we do when a certain Beatles bass guitarist hits town, it was okay as Anderson lives in the now and promoting his new album. Nothing wrong with that.

The third song was the catchy “Ramalama” from his new album, “1000 Hands: Chapter One.” The title speaks volumes.

Anderson talked about how he had started working on a solo album 29 years ago, and then shelved the idea – “things happen in life” – in his garage. Two years ago, keyboardist and producer Michael Thomas Franklin, called and asked about the tapes. One thing led to another and the result is this new album. En route, while it may not have been exactly a thousand hands, quite a few musicians helped Anderson record what is a very satisfying collection of songs.

It’s almost a who’s who of music. I don’t have room here to list everyone, but here are a few:  Rick Derringer, Pat Travers,  Steve Morse, and Steve Howe of Yes are among the guitarists; Chick Corea and Jonathan Cain are among the keyboardists; the late Chris Squire, of Yes, recorded bits for the album on bass; and Ian Anderson of Jethro Tull is on the flute. Yes drummer Alan White shows up. Anderson even has the famed Tower of Power playing horns.

Among the new songs, I really enjoyed “First Born Leaders” with the lyric “everybody wants what they cannot have.” With its Caribbean seasonings, I could almost feel a tropical breeze. And it’s hard to not smile when you listen to “Make Me Happy,” another reggae-tinged song with a sax and trombone in starring roles. It’s funky fun.

Before taking a break midway through the show, Anderson quipped that he would “lie down and have a cup of tea.” Then he played the mesmerizing “WDMCF” which is short for “where does music come from.” It’s very good.

Of course, it wouldn’t be a Jon Anderson concert without some Yes songs. With his new band bringing different sounds, the songs we all know sounded fresh. He played “I’ve Seen All Good People” and “Long Distance Runaround,” making them sound new. A faithful take on “Starship Trooper” with the band rising up and delivering a rousing finish to the show.

Throughout the concert, I marveled at Anderson’s voice. The guy is 74, but those years have evidently not done a thing to his voice. He sounded terrific, never struggling to hit the higher notes. And his eternally positive attitude remains. Yeah, he still sort sways in that Jon Anderson way to the music, much like he did the first time  I saw Yes way back in 1978 at the late great International Amphitheatre on Halsted Street.

I recall the encore that night. It’s the same song he played in the encore Thursday night. And if you have to ask what song that was, well, you’re not much of a Yes fan. Of course, he played “Roundabout.. And one of the best rock songs ever recorded sounded fantastic, even as he tweaked it a bit in the middle.

As I was preparing to leave, a woman in the row in front of mine, turned around and said, “I’ve seen him 40 times and this was the best yet. Put that in your review.”  Another fan smiled and said “great, just great.”

It was the kind of show that had folks leaving with smiles on their faces, in a positive mood. You know, kind of like the mood Jon Anderson has been since we first heard his distinctive voice all those years ago.

On the way out, I  bought the new CD for $20. I listened to it on my drive home, over breakfast, and right now as I write this review. Another fan before the show told me he can’t stop listening to it. I know the feeling.