Three vacant houses in Lyons soon have dates with the wrecking ball.

The village board, at its June 5 meeting, unanimously approved a resolution that will pay Bechstein Construction Corp., of Tinley Park, an amount to not exceed $43,984 to demolish the three houses.

The first two houses are on a block that shares space with light industry and those two lots could one day be used for a future business, Mayor Christopher Getty said.

The third house, in the 8600 block, sits beside property already owned by the village. 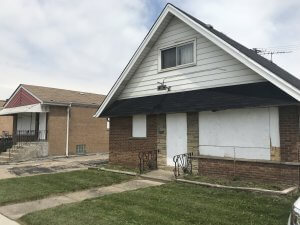 These two vacant houses in the 8400 block of 45th Street will soon be demolished. Photo by Steve Metsch.

The village owns the vacant lot west of that house and a vacant lot to the south, stretching down to 45thPlace. The demolition will create a vacant L-shaped property once the demolition is completed, its future use to be determined.

Best of all, as Getty noted after the board meeting, the demolitions are not costing Lyons a penny. The village board, at its May 15 meeting, unanimously approved a $180,000 grant from the Illinois Housing Development Authority to pay for demolitions of such properties.

A man living next door to the house in the 8600 block of 45thstreet said he was happy the vacant house would be demolished.

“We’ve been hearing about that for a year,” he said.

Now, with funding in place and a contract approved, the next thing he’ll hear will be the house tumbling down

On Medicare, Democrats Shouldn’t Trust Trump Baby Boomers
Red light cameras would be good, if they were fair Opinion