The 20th Anniversary commemorations of the Sept. 11, 2001 terrorist attacks were sober and disturbing. But the failure of American politicians to get together as one voice to join as one nation is even more disturbing. President George W. Bush spoke about that polarization during his remarks at the Shanksville commemoration. Instead of bringing America together, our politicians prefer to keep us apart so they can benefit for themselves politically

Twenty years of watching the collapse of the World Trade Center buildings has been very disturbing. But what is more disturbing is how divided America remains, polarized over politics, anger and hate.

Things are so bad in America that we couldn’t even get all of the presidents, the incumbent and the former presidents, to set aside their personal problems and focus instead on the American people.

Sept. 11, 2001 was a real trauma not just for the families who lost relatives that day – 2,977 were killed, but for the rest of America that lived in fear for the first few weeks as reports circulated of more violence.

You would think that the depth of the tragedy would be enough to force politicians on both sides, Republicans and Democrats, to set aside their angry hate for at least one day to focus on the shared tragedy that this country went through.

Ironically, it was former President George W. Bush who acknowledged this hatred that has divided America during his remarks at the site of the field near Shanksville, Pennsylvania where passengers on United Airlines Flight 93 rebelled against the terrorists and surely prevented the hijacked plane from crashing into the White House or the U.S. Congress.

“In the weeks and months following the 9/11 attacks, I was proud to lead an amazing, resilient united people,” Bush said at the Pentagon ceremonies.

“When it comes to the Unity of America, those days seem distant from our own. Maligned force seems at work in our common life that turns every disagreement into an argument and every argument into a clash of cultures. So much of our politics has become a naked appeal to anger, fear and resentment.”

America is a divided nation. Very divided. And no one is doing anything about it.

I do a podcast each week now with former Congress Bill Lipinski, one of the nation’s iconic “Reagan Democrats.” Regan Democrats, for those who don’t know or who have forgotten, are Democrats who dismiss the extremism of the Left, and the extremism of the Right, and instead have found a centrist ground right in the middle between the two that embraces some of the views of the Left and some of the views of the Right.

These centrists, and I consider myself a Reagan Democrat, too, believe that the middle is where the nation’s only commonsense attitudes persist. They don’t believe in the 100 percent, which is in effect undemocratic and a form of despotism. Instead, Reagan Democrats look at all politicians and apply an 80 percent filter.

Reagan’s former Chief of Staff Jim Baker recalled his boss explaining, “I’d rather get 80 percent of what I want than go over the cliff with my flags flying.”

That’s the kind of commonsense we don’t have any more.

Fueling the divide, and they will never own up to their contribution to the polarized hate driven divide, is the mainstream national American news media. They have been stoking the flames of hatred by favoring one side over the other.

They close their eyes to the violence and tyranny of the Black Lives Matter protestors, because they embraced the views of the Democratic far Left, but they exaggerated the crimes of the far right calling the same BLM like violence at the Congress on January 6 as an “insurrection.”

Jan. 6 was an insurrection only because the media and the far Left called it so. It was far less of an insurrection than the violent protests that destroyed thousands of businesses and killed and injured many more. That’s what the national media does best, speak from both sides of its hypocritical mouth.

That ignorant attitude is what is undermining this nation. It was on full view last Saturday on Sept. 11.

What America needs is another Ronald Reagan. He wasn’t perfect. But he sure had more commonsense than any of the people who claim to be leaders today.

(Ray Hanania is an award winning former Chicago City Hall reporter and political columnist. His mainstream political columns are published in the Southwest News Newspaper Group in the Des Plaines Valley News, Southwest News-Herald, The Regional News, The Reporter Newspapers. His Middle East columns are published in the Arab News. For more information on Ray Hanania visit www.Hanania.com or email him at rghanania@gmail.com.) SUBSCRIBE BELOW

Right from the Middle: How we can bring America back Bill Lipinski 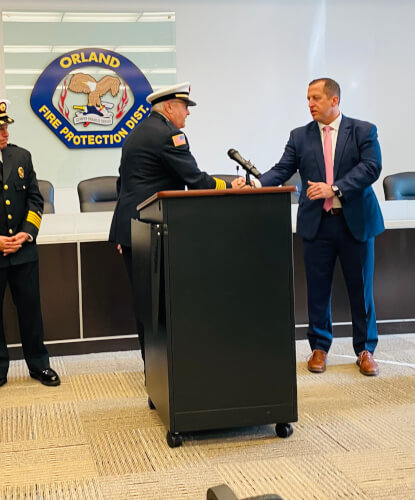