Television has always reflected the worst of our society, but in recent years it has gotten even worse especially int he area of politics. But the revival of a former TV sitcom, Roseanne, has returned us to the glory days of TV when comedy and humor in the 1970s and 1980s was driven by talent rather than by who you hated in national politics. Published in the Southwest News Newspaper Group April 5, 2018

They used to say TV – the “boob tube” – would corrupt our little minds. These days, it has never been truer as partisan, poisoned politics spreads like a cancer into everything.

TV is a warzone of partisan hate, these days, so I cheer when something rises that challenges the one-directional river of hate that plagues most TV news, entertainment and talk. I am talking about the excessive and nauseating anti-Trump hate on TV. It’s really disgusting.

With only a few exceptions, many of today’s TV sitcoms are cheap knock-offs of rehashed humor. I love the spin-off of the hit comedy series “King of Queens,” called “Kevin Can Wait.” Partnering Kevin James with Leah Remini makes the second season very entertaining.

I’ve run from commercial “free” TV – which isn’t free from hate or commercials – and turn instead to pay channels like HBO, Netflix, Hulu and even Amazon Prime where the biggest problem is internet consistency. You can find both sides of the political spectrum there.

But somehow, someone in mainstream TV figured out what the public needs and revived the 1980’s series “Roseanne,” a sitcom about a lower middle-class family (living in a fictional home based on Elgin, Illinois) that just about does everything right.

It stars Roseanne Barr and John Goodman, parents of a dysfunctional brood that probably reflects real American life better than other TV shows.

The humor is phenomenal, and that’s no wonder because Whitney Cummings, an American comedian with a true sense of humor that cuts deep into the American psyche, is the executive producer.

Cummings was born in the early 1980s, and that is ironic because much of the Roseanne revival reflects a lot of the 1970s and 1980s TV flavor that was killed off by an entertainment media which followed the flute of a dying mainstream news media over the cliff like lemmings. Or, I could have written today’s sitcom producers have been drinking the anti-Trump cool aid like Jim Jones worshipers in Guyana.

This isn’t the entire list of great shows, just a few I remember that I once enjoyed.

My mother loved “The Golden Girls,” and so did I. It had political humor, but the humor had respectful limits, boundaries allowing for discussion unlike the cleverly disguised hatred that spews from George Stephanopoulos, Robin Roberts, Joe Scarborough, Jake Tapper, or the garbage spread on hate sites like Huffington Post and so many more.

Born in the late 1980s, Roseanne continued for nine seasons thru 1996, one of the last great series on mainstream TV, which has become so rotten.

Every Tuesday at 7 pm, I get to do what I’ve been doing for years, point the TV remote and happily flip past all the garbage to one show, ABC.

Don’t call my cell, message me on Facebook, SnapChat, WhatsApp, or Facetime, or Tweet to me when the Conner family is reigning royal.

Let me enjoy the glorious past!

(Ray Hanania is an award winning columnist, author and former Chicago City Hall reporter. Contact him through his website at www.Hanania.com or at rghanania@gmail.com.) 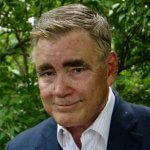