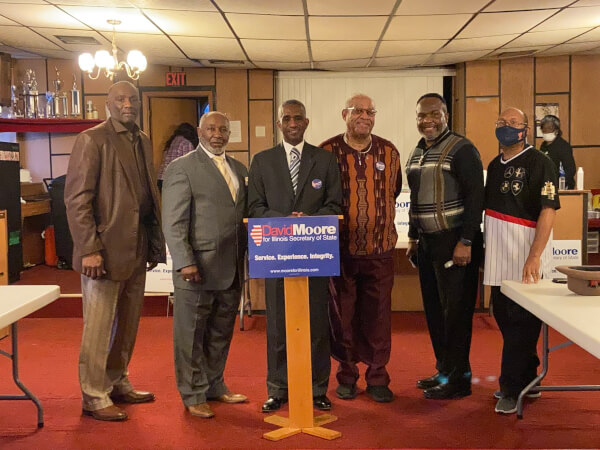 Clergy in Danville, Illinois, held a news conference Thursday, March 31, 2022, at Antioch Missionary Baptist Church, 311 N. Collett, to endorse David Moore for Illinois Secretary of State. T. Rev. Lucius Barber of the Interdenominational of Concerned Pastors is the church’s long serving pastor and a well-respected member of the Danville community.

“I feel we would be blessed to have Chicago’s 17th Ward Alderman David Moore as Illinois Secretary of State. His education and work in Chicago as alderman have molded him for such a time as this,” said Rev. Barber.

“He is willing and ready to serve all of the citizens of Illinois. Moore made it his mission to introduce himself personally to the downstate clergy and citizens as well as the many pastors and citizens in Chicago. We are praying for him and for the State of Illinois.”

Another pastor with a long reach for his work in Rock Island, Jacksonville, Galesburg, Kewanee and Danville is Elder Tyson Parks, who is the presiding elder of the African Methodist Episcopal Church local conference. Parks, who has met Moore several times during the campaign, says he is proud to support him.

“He (Moore) sees the office as a way to provide access, customer service, transparency, accountability and integrity. He has the skills to be an effective secretary of state,” explained Elder Parks.

The Chair of the Vermillion County Democratic Party also was in attendance. Germaine Light said she came to meet Moore after several people who she respects told her about him.

While Light said the party organization could not endorse, she could as an Illinois voter.

“There is a difference in the three candidates running for this seat and I thank you for choosing me to endorse as your next secretary of state,” said Moore, who is running a grassroots campaign fueled by hundreds of volunteers.

The clergy are committing to get the communities with which they have relationships involved in Moore’s campaign.

How can movie reviewers all be so wrong? Baby Boomers