Chicago’s financial mess is dominating the news and dragging the state of Illinois down. The only solution Chicago mayor’s have had over the years is to make the State bail out the city. But I think it’s time we stopped

I’m so tired of listening to Chicago Mayor Rahm Emanuel whine about how he can’t pay Chicago’s bills.

That’s his problem, not mine. No one forced him to be mayor of one of the worst managed cities in America. He wanted that job. So man up Mayor! Make Chicago taxpayers pay for the city’s mistakes, not the suburbs.

Emanuel is doing what every Chicago mayor has done over the years when faced with a major a financial crisis of their own making. They whine and expect the state to bail them out.

I say forget about it.

I live in a suburb that pays all its bills. In fact most suburban governments pay their bills, and when they can’t the citizens cough it up in taxes. Our pension funds are nearly fully funded.

And that’s the difference between Chicago and the suburbs. When the suburbs have a problem, we come together and solve them. When Chicago has a problem, they whine and demand handouts from everyone else. 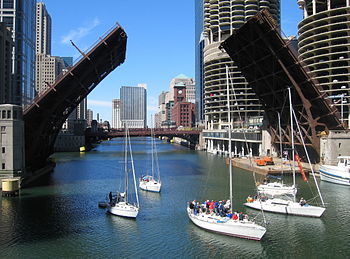 A small flotilla of boats passes through the open State Street Bridge on the Chicago River, Chicago (Photo credit: Wikipedia)

The Chicago public schools are a disaster with a $1.1 billion deficit. They spend $5.8 billion a year to do what? The overall education of the students is poor. No one wants to go to a city school, in a large part because of the bad education there but mostly because the city is infested with crime.

The city’s pension funds are barely 33 percent funded. They need $900 million to cover their problems for bloated pensions for police, fire and municipal employees, most of whom are overpaid. And a lot of them secretly live in the suburbs, too.

The Chicago crisis is dragging the rest of the state down because Chicagoans don’t want to bite the bullet. And their leadership is helping either. The Chicago pension system is a disaster and two Chicago legislators, Ira Silverstein and Sara Feigenholtz, want to use the state’s $80 billion pension fund investments to shore up their political ties to Israel. What are they doing for Chicago?

When push comes to shove, they know they can for the state to bail Chicago out, again. Dipping their hands into the back pockets of hardworking suburban and downstate families to cover their financial mess.

Every year, the Chicago politicians do the same song and dance. They should have their own parade down State Street called “The Chicago Deficit Parade” with “We Can’t Pay Our Bills” floats and bands banging out old tunes about handouts, alms and charity.

The Chicago news media is no help. They make it worse because they have a greater stake in Chicago than they do in the suburbs.

What’s the solution? It’s simple. Make Chicago taxpayer’s pay their own bills. If each of the nearly 3 million Chicago residents coughed up $1,000 a person, their financial crisis would go away. But you know they’d be upset and maybe angry enough to toss out their leadership.. Who knows. Maybe Chicagoans will one day wake up and demand better governance.

When my family can’t pay its bills, I cut back on spending, vacations, nights out and I work more. That’s common sense.

But apparently, it’s not much sense to Chicagoans who are too used to having other people bail them out of their own self-made money problems.

Don’t blame the suburbs or punish us. Blame yourselves and punish your mayor and politicians who waste their time on issues that have nothing to do with Chicago. 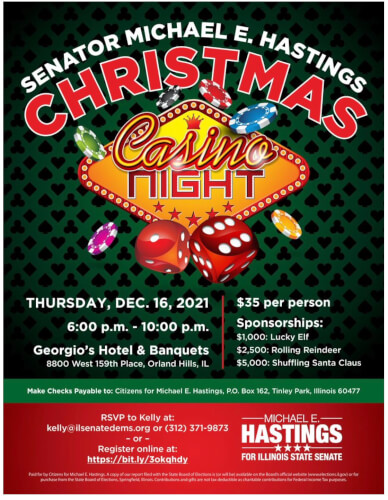