At the recent meeting of the village board’s finance committee, Alonzi floated the idea of Lyons hosting an Oktoberfest celebration.

“Do we ever have any other things going on for the village, like an Oktoberfest? How would we or could we do anything like that?” Alonzi asked on June 5.

“We could have a German band, German beer, or whatever kind of beer, brats, potato pancakes,” Alonzi told trustees. “Can we do anything like that?”

Mayor Christopher Getty replied: “We can do anything in Lyons.”

Alonzi said she’s “willing to make the calls, find out how much it would cost.” 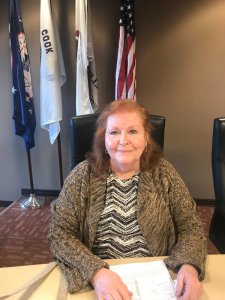 Lyons Trustee Pat Alonzi wants the village to host an Oktoberfest, saying “I like to see people happy.” Photo by Steve Metsch.

Getty said it would likely be similar to the village’s 125thanniversary party hosted in 2013. He cautioned that putting a festival together can be a challenge.

“Vendors sometimes can be very hard to come by. Some of the hardest event to attract them to are the one-day events. They want to go to events that are four days long. They bring in their equipment and are there for four days,” Getty said.

Getty said village staff would have to “look at logistics and dates,” but added that he is open to the idea of hosting an Oktoberfest celebration.

Meanwhile, the village is working with the Windy City Blues Society about hosting a blues festival this year at Cermak Park.

“We’re working on the permitting with Cook County. It would be an all-day event with two stages,” he told trustees. “The big benefit with Cermak Park is that parking lot has 380 parking spaces.”

After the village board meeting, Getty said it may too short notice to put together an Oktoberfest this year, but 2019 could be feasible.

Alonzi said she’d have no trouble finding volunteers to help, noting that she single-handedly 10 years ago started a block part on the village’s west side which has grown into a big annual community event.

“I borrowed tents from neighbors, tables from neighbors. And I made 11 trays of food by myself, and I made seven trays of bakery by myself. I was up till 2 o’clock in the morning doing that. But it turned out great. And they said ‘You have to have it again.’ I said, ‘Okay, if everybody helps’,” she said.

Alonzi said she’s been thinking about Lyons hosting an Oktoberfest “for a while.”

“I like to see people happy and I like to see Lyons have a good time,” she added. “I think it would be a huge, huge success.”

Pappas: Get early look at next year’s property taxes Chicago