For the first time in three years, the Summit boat launch on the Chicago Sanitary and Ship Canal was open to visitors on a recent sun-kissed morning.

They later reconvened at the village hall for a brainstorming session about developing the 3.5 acres. 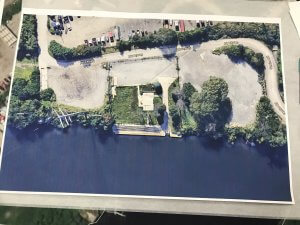 This is an aerial view of the Summit Boat Launch, which officials hope to redevelop. Photo by Steve Metsch.

Last year, the village received a grant that has the National Park Service providing its expertise in helping the village develop the site that’s been closed since 2015.

Visitors on June 5 were thrilled to get a closer look at the boat launch. The concrete ramp leading to the canal still is in place. So are the steps on the east side of the ramp.

“You can imagine fishing events for kids, concerts along the canal, there’s a tremendous amount of potential here,” said Josh Ellis, vice president of the Metropolitan Planning Council.

“It’s a challenge to work with all these poles and wires,” he said nodding toward electric lines overhead, “but we’ve got creative folks here, architects who can come up with ideas to make this work.”

He noted that wildlife loves the area. A bald eagle flew over the launch. Two large water snakes were seen in the canal.

John Quail, director of watershed planning for the Friends of the Chicago River, said “it’s a place on the canal where there aren’t a lot of available spots for recreation. They can create a greenspace on the river where people want to come to.”

Quail envisions crew teams coming to the launch, along with folks with rowboats or kayaks. “There’s no whitewater flow, so you can go upstream or downstream without a lot of worries,” Quail said.

The canal links to the South Branch of the Chicago River. He envisions folks rowing their kayaks 11 miles to Ping Tom Memorial Park in Chinatown someday.

The land is owned by the MWRD, second only to the Forest Preserve District when it comes to land ownership in Cook County.

“You’d be amazed by the number of egrets, blue herons and bald eagles that are down here. That means there are a bunch of fish. This would be a great place to teach kids how to fish.”

Laura Barghusen, an aquatic ecologist for Open Lands, called the site “really amazing.” She likes that it’s close to the Deep Summit neighborhood a block or two away.

A “nature play area for kids” may be a nice addition, she said.

“I’d love to see a boat launch that could accommodate non-motorized boating. Guided canoes would be great for getting people from the neighborhood involved,” she said.

After the tour, the group met at the Summit Village Hall to discuss ideas. Mayor Rodriguez has made developing the site his pet project, citing “lots of potential for recreation.”

The National Park Service grant of”technical assistance for a recreational project” along the canal. The grant runs to Sept. 30, 2018.

The MWRD lease requires that no structures can be built within 60 feet of the water’s edge, said Michael Mencarini of the park service. “That shouldn’t be a problem,” he said.

Steps along the water’s edge, east of the launch, are grandfathered in.

Some ideas discussed by the group included a nature area for children, bands playing concerts on a barge in front of the steps, launching kayaks and other non-motorized boats, classes for local schools and park districts, fishing lessons and derbies, a snack bar, a community garden and a gazebo.

The ideas will all be considered, along with responses to a survey of residents, when putting together grant applications, Rodriguez said.

The June 5 gathering echoed some ideas from the Summit residents who suggested picnic tables, a wildlife habitat, fishing lessons, a fitness are, a bicycle rack, and a canoe/kayak launch.

Rodriguez thinks developing the area could lead to more commercial developments in the village, and more people coming to Summit. It’s kind of what Quail said of the site earlier in the day: “It’s like ‘Field of Dreams,’ if you build it, they will come.”