Things will be heating up at Toyota Park this weekend, and it’s not another blast of hot summer weather.

The first-ever Chi-Town Hot Sauce Expo will be held Saturday and Sunday on the stadium’s parking lot, 7100 S. Harlem Ave., in Bridgeview.

Anything and everything about hot sauce will be there. More than 40 hot sauce vendors are expected to attend. There will also be live bands, lucha libre wrestling, a beauty contest for chihuahua dogs, and a cocktail competition.

But the real stars are the hot sauces, along with folks who will put their bodies to the test by eating hot and spicy foods in competition –  along with hot peppers – in a variety of eating contests.

The expo is being presented by High River Sauces and FM Entertainment. Visit Chitownhotsauceexpo.com for more information.

The company sells a wide range of BBQ and hot sauces like one called Rogue. The website says it is “all natural and all attitude” with an “unprincipled blend of the hottest peppers in the world.”

You get the picture. 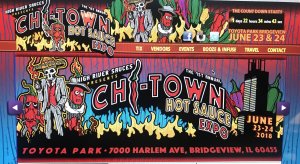 “Steve was in my suite last year at the (Chicago) Open Air Festival and he was telling me about his hot sauce expo he does around the country. He said he had a lot of interest from vendors to come to Chicago. He asked me to take part and I said ‘Let’s give it a whirl’,” Mastalerz said.

Is two days too much? That’s like saying hot sauce is too hot. There’s going to be plenty to do.

“It’s all the best hot sauce companies in the world, but we’ll have different eating contest. It’s a fun atmosphere based around spicy food,” Mastalerz said.

Ironically, he loves all things hot “so this is right up my alley,” he said.

Saturday’s lineup is the Italian Beef Sandwich of Destruction at noon, Spicy Taco of Hell Challenge at 1 p.m., Chuck’s Café Spicy Pulled Pork Challenge at 2 p.m., The Hot Diggity Dog Challenge at 3 p.m., the Cranked to 11 Spontaneous Combusted Challenge at 4 p.m., and the Deep Dish Pizza of Doom Challenge at 5 p.m. Fatal Order plays music from 6 to 8 p.m.

Sunday starts with the Slaytanic Quesadilla Challenge at noon, the chihuahua beauty pageant at 1 p.m., Death Wing Eating Challenge at 2 p.m., and the Booze & Infuse Cocktail Competition at 3 p.m.

The Puckerbutt Pepper Company presents The Guinness Book of Records Reaper Eating Contest, with a $1,000 grand prize, at 4:30 p.m Kashmir, a Led Zeppelin tribute band, plays from 5:15 to 7 p.m. Sunday.

Admission is $10 in advance and $15 the day of the show. Those tickets include free tastings from all of the hot sauce vendors. Visit the web site for more information.

A beer and BBQ platter, with other treats, sells for $40. The ultimate VIP package is $100 and includes craft beers, an all-access back stage pass, a limited-edition expo poster, a gift bag and other goodies.

“I’m hoping for a big crowd. We’ve got a lot of advertising out, and have 50,000 fliers out there. We’ve sent literature to every household in Bridgeview,” said Mastalerz, previously the events director at Toyota Park.

Military, law enforcement and first responders get free admission by showing their ID at the gate.

Homecare will be topic of next Orland Fire program Fire