On Wednesday, October 20th at 5:30 PM (CST) WorldChicago will honor the local, and global, leadership of Peggy Parfenoff with, “A Toast to Twenty Years with WorldChicago,” at Carnivale Restaurant (702 Fulton Market, Chicago, IL 60661).

This fun and festive reception will bring together culture, cuisine, cocktails, and the Chicago community for a global celebration of Parfenoff’s work to bring the world to Chicago and Chicago to the world through citizen diplomacy.

Citizen Diplomacy is the idea that every person has the right and the responsibility to reach out and engage with different cultures, to build mutual understanding, through meaningful person to person relationships.  As the leader of WorldChicago, Parfenoff has engaged Chicagoans in citizen diplomacy since November 1, 2001,

“It has been twenty years, but 10,000 handshakes,” says Parfenoff. “Each person that I have met and story that has been shared has fostered connections, shattered stereotypes, and enriched the Chicago community.” 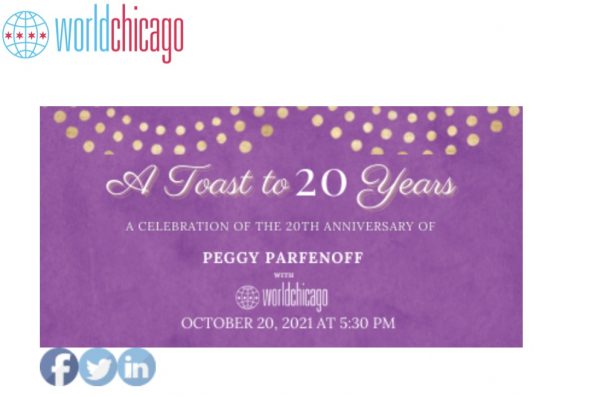 During her tenure, WorldChicago has welcomed more than 15,000 international visitors to Chicago through international exchange. Key programs that she has led and facilitated include the International Visitor Leadership Program, Young Transatlantic Innovation Leadership Initiative (YTILI), the U.S. Department of State’s flagship program that brings 60 for emerging entrepreneurs from 45 countries across Europe to Chicago, and the Youth Diplomats program, a nine-month experiential youth leadership development program for Chicagoland high school students, and many, many more.

“Peggy’s leadership and her exemplary work on behalf of WorldChicago is seen and admired around the world,” says Virginia Russell, WorldChicago Board Chair and former Associate Director of UIC The John Marshall Law Center of International Law. “Throughout my 30 year career in international relations and my lifelong work in diplomacy, Peggy stands out as an invaluable leader who is able to share cultures and spark innovation in Chicago.”

Parfenoff, has served as a member of the Board of Directors of Global Ties U.S., was a recipient of the National Council for International Visitors Programmer of the Year, and The Global Ties Network Decade of Impact Leadership Award will receive “toasts” from Ambassador Fay Hartog-Levin, Global Ties US President Katherine Brown, Stephanie Sutton, Senior Adviser at the U.S. Department of State, WBEZ’s Steve Bynum, and many more. Tickets are available for purchase at WorldChicago’s website at www.worldchicago.org/events.

WorldChicago, established in 1952, is a local nonprofit organization that brings the world to Chicago and Chicago to the world through citizen diplomacy. Each year we engage and welcome international visitors to Chicago to exchange ideas, culture and best practices through professional and personal exchanges that build global bridges and promote mutual understanding, build lasting connections, and strengthen individual and collective capacities to make the world a more peaceful and prosperous place. To learn more about WorldChicago, upcoming visitors, programs, and outreach, please visit our website at worldchicago.org.

Vigil held in Cicero for victims of Feb. 2 fire Fire