Pritzker lives in glass house of money and hypocrisy

Illinois Governor J.B. Pritzker is slamming rival Darren Bailey for comparing the Holocaust to abortion, and feeding reporters like Greg Hinz of Crains Chicago Business to slam Bailey for anti-Muslim comments (Hinz doesn’t care about Muslims and never has), Pritzker and Hinz don’t care that in 1998 Pritzker called Muslims “terrorists” and has refused to apologize for that. Instead of presenting fair information, the media is pandering to kiss up to Pritzker’s billions for advertising revenues. The media will write anything and ignore facts to get cash and Pritzker will throws stones from his glass house because he has so many of them to break

Illinois Gov. J.B. Pritzker lives in a Glass House, although it is padded heavily with a lot of the money he made through ownership of the Hyatt Hotels that he doesn’t think can crack.

In July, the Jewish newspaper Forward published a story transcribing some of the comments Republican Gubernatorial candidate Darren Bailey made back in 2017 in which he compared the killing of fetuses with the Holocaust.

What Bailey didn’t do was to deny the Holocaust, which references one of the world’s greatest heinous atrocities that was committed before and during World War II by the Nazis.

The story is a news story, and it was quickly picked up by every major news organization in Illinois, as Jewish leaders spoke out attacking Bailey for making the comparison.

Bailey issued an apology that was made public: “In no way was I attempting to diminish the atrocities of the Holocaust and its stain on history,” Bailey said. “I meant to emphasize the tragedy of millions of babies being lost.”

Pritzker, the third Jewish governor in the state’s history, called Bailey’s remarks “disqualifying,” and told other media it was “anti-Semitic” and “deeply disturbing.”

“To equate the Holocaust to a woman’s right to choose is not only disturbing, but it’s also disqualifying,” Pritzker tweeted. “Illinois, this kind of false equivalence shows exactly the type of man and leader Darren Bailey is.”

Yes, Pritzker has money not only to promote himself but to also spend on other candidates, too, like when he attacked Democratic State Party Chairwoman Robin Kelley and orchestrated her replacement.

But Pritzker has his own religious problems, like when in 1998 while running for Congress in the 9th District, he attacked an opponent for accepting money from Muslim groups, accusing them of being terrorists.

Pritzker’s attacks got lots of play in the mainstream news media but when Muslims demanded that Pritzker apologize, the demands were ignored and news stories were never written. Reporters like Greg Hinz were quick to pander to Pritzker’s money by accusing Bailey of criticizing Muslims, but he completely ignored Pritzker’s racist attack against Arabs and Muslims because Pritzker is the media money cash cow in this election season and journalists will write anything to preserve that dole.

That’s what happens with the mainstream news media when money is involved. They shelve their holier-than-thou principles to keep the advertising spigots open.

Pritzker spent a fortune advertising his candidacy in 1998 and no newspaper was going to “cut off their nose to spite their advertising face” by joining the bandwagon to demand an apology from Pritzker or attack him, the way the media and Pritzker today are attacking Bailey.

In 2017 when Pritzker was running for governor, the same year Bailey allegedly made his remarks, the Arab American Democratic Club demanded that Pritzker apologize for the 1998 attack calling Muslims “terrorists.”

Pritzker repeatedly refused, until his campaign spokesperson and former Springfield TV reporter who is Arab, Jordan Abudayyeh, told the insider news service Capitol Fax in December 2017 that Pritzker did apologize.

Pritzker never released an apology. And the news media didn’t care too much because they again did not want to jeopardize profiting from Pritzker’s hundreds of millions of dollars in campaign advertising spending.

Pritzker did apologize privately to a small group of Arabs who supported him and who he supported, just enough so Pritzker could tell the media, don’t worry when you bash Muslims it is not the same as bashing Jews.

Why is insulting Jews more damaging and more of a news story than insulting Muslims?

Because Bailey’s comments were known long before they were brought to the Forward newspaper’s attention and could be turned into a political weapon to help J.B. Pritzker win re-election this November.

It has nothing to do with moral indignation by Pritzker or even the biased and hypocritical mainstream news media. They don’t care about stopping racism, hatred or bigotry. They need it to get what they want and they don’t care who they have to trample in the process.

During his campaign, Pritzker did say he would appoint Arabs to the state’s 435 boards and commissions. Not surprisingly, he didn’t do that until just recently when he appointed four.

Do you think the news media cares? Visit www.Hanania.com to read my columns on Pritzker’s anti-Arab and anti-Muslim history. 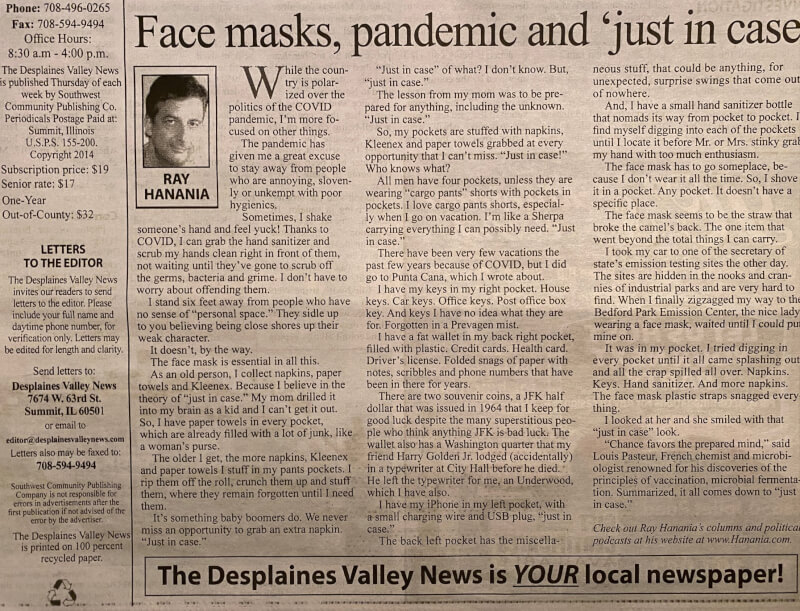