After a Freedom of Information Act request to the Chicago Park District (CPD) about the Christopher Columbus statues removed this past summer, attorneys for The Joint Civic Committee of Italian Americans (JCCIA) found a plethora of paperwork signed over fifty years ago.

Included was a signed agreement that in essence states, “The Park District will, in perpetuity, obtain the written approval of the Joint Civic Committee of Italian Americans before making any substantial change to Columbus Plaza or the statue.” That did not happen. The Arrigo Park statue was removed in the middle of the night in July, without written notice.

Ron Onesti, President of the Joint Civic Committee of Italian Americans, wrote a four-page letter addressed to the Chicago Park District Board and its Legal Counsel. In it, he referenced the legal basis and the history of the agreement with the CPD, and the reasons why this is a Park District issue rather than a City of Chicago concern. In fact, the letter also infers that the Mayor removed those statues “temporarily” without jurisdiction as the Chicago Park District, an independent municipality, should not have allowed the City of Chicago to interfere with the agreement between the CPD and the JCCIA. 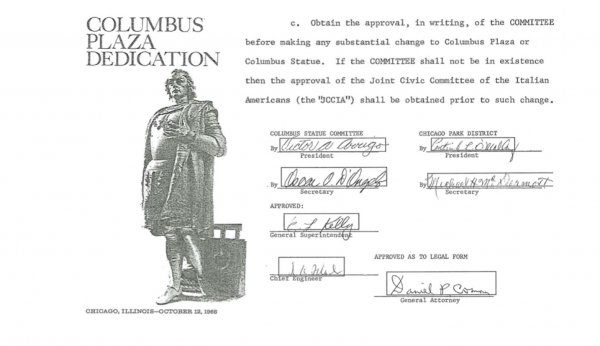 Attached to the letter are ten exhibits, including the signed agreement, meeting minutes, letters, and the program from the dedication on October 10, 1973. Exhibits found here.

“We are hopeful that the Chicago Park District will honor what we feel to be a solid, enforceable contract with us,” said Onesti. “These statues are very important to our community and represent generations of traditions, including the one day of the year that we celebrate our culture on the federal Columbus Day holiday. We know the original intention of removing the statues was one of safety, but that was months ago, and it is time to return them. I look forward to a dialog towards a resolve of the Park District obtaining the statues from the city and putting them back to their original locations.”

The JCCIA, a 501c3 corporation, is the congress of over fifty Italian American organizations in the Chicago area

In this time of great social examination, history continues to be discussed, challenged, and underscored. Chicago’s Italian American community will remember the victims of the country’s largest mass lynching by vigilantes 130 years ago this Sunday, March 14 at 2pm. The solemn and informative event will take place at the foot of the fountain where a statue of Christopher Columbus once stood at Arrigo Park, 801 South Loomis Street in Chicago.

In 1891, when a viable murder suspect of New Orleans’ prominent police chief was not determined, the Mayor ordered the arrest of over two hundred “Dagoes,” a contemptuous term for someone of Italian extraction. Of them, 19 were indicted, nine were tried and all were acquitted. Unfortunately, anti-immigrant sentiment and horrendous mistreatment of Italian dockworkers prevailed as 3000-8000 vigilantes stormed the prison on March 14, 1891 and proceeded to kill 11 Sicilian men, shooting, and lynching them in the public square.

“This horrific event is another example of anti-immigrant oppression many European ethnics, especially Italians, suffered during America’s formative years,” said Ron Onesti, President of The Joint Civic Committee of Italian Americans and coordinator of the event. “It is our intention to bring to light some of these occurrences as social healing remains at the forefront of our society.”

In April of 2019, New Orleans Mayor LaToya Cantrell issued an official Proclamation of Apology to the Italian American community stating: “What happened to those 11 Italians, it was wrong, and the city owes them and their descendants a formal apology,” Cantrell said in her address. “This attack was an act of anti-immigrant violence.”

130 years later in Chicago’s Columbus Plaza at Arrigo Park, members of various ethnic communities, along with Frank Maselli, Honorary Consul of Italy in New Orleans, and Chairman of the Italian American Cultural Center in New Orleans, will gather to remember these 11 Sicilians. In 2019, Maselli hosted the Apology Proclamation ceremony in New Orleans and will attend Sunday’s event in Chicago. This solemn remembrance ceremony notes the deep wounds of anti-immigrant suffering as well as the importance of acknowledging this history as a source of healing toward a more peaceful and inclusive society.

Those in attendance at Sunday’s remembrance will adhere to CDC guidelines and protocols while the ceremony will also be streamed on JCCIA’s Facebook page.