Despite the coronavirus pandemic, parents, teachers, staff and students still managed to give St. Joseph School Principal Lawrence Manetti, Sr., a warm sendoff for his retirement.

On the afternoon of June 12, they had a 40-vehicle parade that drove around the Summit school to honor Manetti.

Some had balloons. Some had posters. Others had words of encouragement written on windows. All were honking horns.

The parade was organized by Sonia Ponce, president of the school’s parent board.

“This is our end of the school year parade that we hijacked to wish him well for his retirement,” Ponce said over the blare of sirens on two police vehicle.

Manetti has worked in education for 40 years and has been principal at St. Joseph School for 24 years, Ponce said. 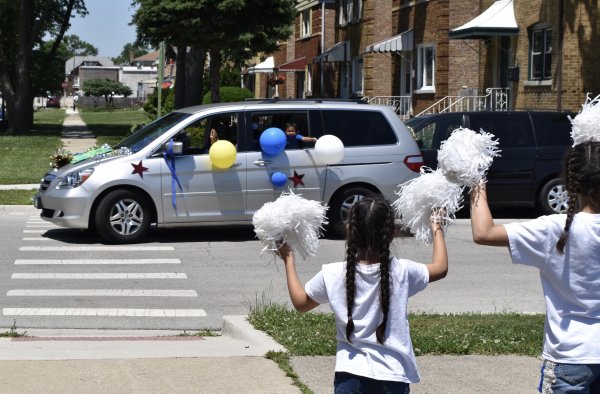 The parade for retiring principal Lawrence Manetti, Sr., had decorated vehicles and cheerleaders outside St. Joseph School in Summit. Photo by Steve Metsch

After the parade, parents, students, staff and teachers gathered in the parking lot – all with social distancing in mind – for a sendoff led by Ponce.

“With all the (virus) restrictions we’ve had, this is what we came up with,” Ponce said. “Thank you for coming out to support this event.”

She called Manetti “amazing” and added, “we’re absolutely going to miss him.”

Manetti appeared moved by all the attention.

“A person can’t stay at a school for 24 years without the support of the community,” Manetti said.

Manetti said he has told his replacement, “I’m a little jealous because I think she’s coming into a great turning point for our school.”

“I’m wishing her the best as we move forward, as the school moves forward,” Manetti added.

He thanked parents for their support during the coronavirus pandemic lockdown that forced the school to shut the doors.

“On March 13th when we got the word (about closing for the virus) that Monday (March 16) we were up and running,” Manetti said. “I want to thank parents for pushing the children to get the work done. And the children did a wonderful job.”

Ponce said that Manetti had told her to not give him any gifts, but that was ignored.

“Most of us here are Cub fans. Mr. Manetti is a White Sox fan. So, we had something made for him, just for him,” she said. 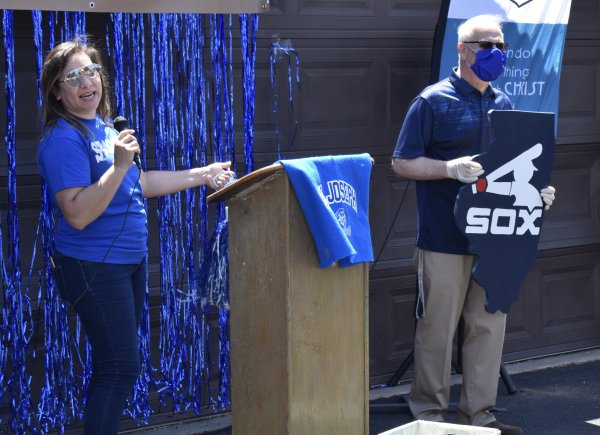 With that, two students handed Manetti a large wooden carving in the shape of the state of Illinois and bearing the White Sox logo.

“My brother made it,” Ponce said. “He’s a diehard Cub fan. He said his hands were burning.”

Ponce also announced the start of the Manetti Scholarship Fund for future students at the school, noting that “his legacy is consistently helping others.”