On a warm evening, Crystal Skoczylas and her extended family settled down for a fun night in the parking lot of SeatGeek Stadium.

They were among hundreds of other movie buffs there for the first drive-in movie shown outside the stadium.

Visitors paid $30 for each vehicle – it’s $50 for premier parking up front – to attend the debut of Chicago Drive-In. Vehicles parked facing south, where the 70-foot-wide screen stood high above the lot.

“We have two carloads here, a total of 10 of us,” the Bridgeview woman said. “That’s a good deal.”

Organizers plan to show movies each night of the week as a way get folks out of their houses for socially distanced entertainment during the coronavirus pandemic. 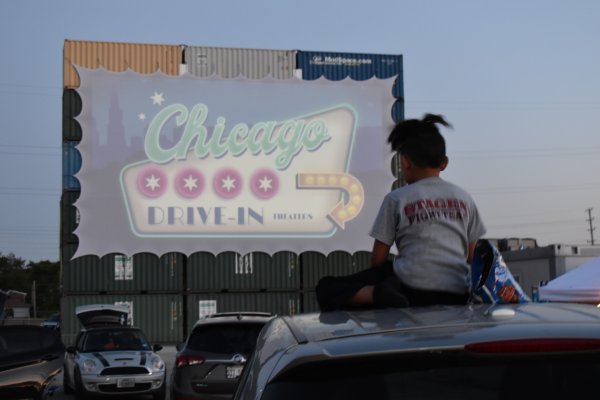 Angel Cruz, 10, of Chicago, has a prime viewing spot atop his family’s SUV on Opening Night of the Chicago Drive-In Theater in Bridgeview. Photo by Steve Metsch.

Skoczylas and her family attended Opening Night June 11. For dinner, they ate chicken and pork chop, which had been grilled at home.

Of course, she said, it wouldn’t be a movie without popcorn that they also brought from home.

“It’s very exciting that Bridgeview is doing this at SeatGeek Stadium,” Skoczylas said. “It not only enhances our community, but other communities for coming out here.”

“It’s awesome. We live in a great area. We’re having a pandemic going on, but we’re not going to let that stop us from doing things for our village,” Skoczylas added.

Movie buffs drove from all over the Chicago area for a night out and to watch “The Goonies,” a 1985 comedy by Steven Spielberg. 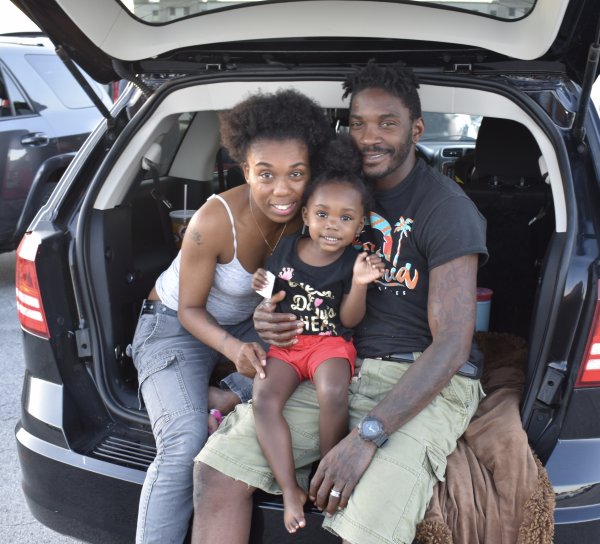 Chandelier and Matthew Brown didn’t mind a long drive from Park Forest to enjoy a drive-in movie with their 2-year-old daughter Egypt.  Photo by Steve Metsch

A few cars down the row, Matthew and Chandelier Brown, of Park Forest, waited for the movie with their 2-year-old daughter Egypt.

“It was worth the ride,” Chandelier said. “We don’t have stuff like this in our area, so if it costs to travel to have some fun, we’ll do it.”

They hadn’t been to a movie since Egypt was three months old. The last drive-in movie they saw was at the now-closed Cascade on North Avenue in West Chicago.

In the next row, Heather and Patrick Keelan, of Evergreen Park, sat in lawn chairs in front of their car.

They are both teachers and have been itching for a fun outing for just the two of them this summer.

“We have a two-year-old at home, so this is Date Night for us … It’s our first (night out) since March,” Heather said.

“We’re looking for something to do,” she said. “You can’t go out to shows. You can’t see live music.” 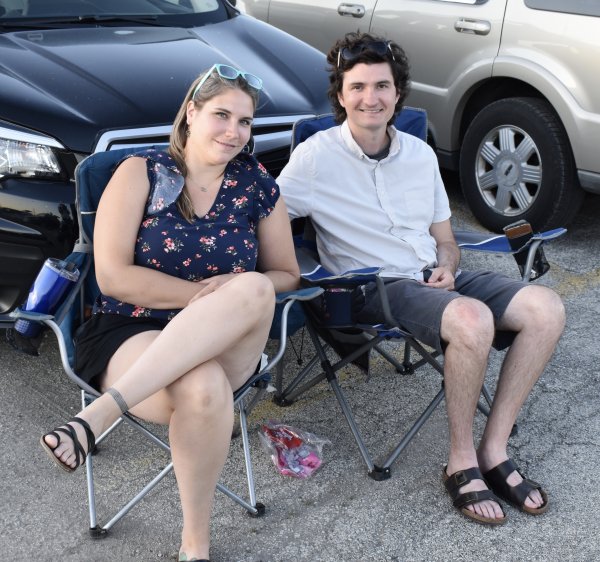 Heather and Patrick Keelan, of Evergreen Park, enjoyed their first Date Night since before the start of the coronavirus pandemic. Photo by Steve Metsch.

There came prepared for the movie with “libations, snacks, and Twizzlers,” Heather said.

The price came to $15 each, a bit steep, but Patrick didn’t mind.

“That’s what movies cost, but those are new movies,” Patrick said. “This is ‘Goonies.’ But that’s cool. We’re happy to be here.”

“I know the Chicago Fire left here,” Patrick said. “I’m sure they’re looking for more revenue coming in. I hope it doesn’t go away completely.”

Promoter Louie Mendicino said he was encouraged by the first night, and expects more movies will be scheduled. You can find the up-to-date movie schedule at www.chicagodrivein.com.

“The Incredibles” is tonight’s movie. “Big Trouble in Little China” is planned Thursday night with “Ferris Bueller’s Day Off” on Friday, and “The ‘Burbs” on Saturday. Each starts at 9 p.m.

There will be screenings of R-rated movies at midnight each weekend. “Superbad” is on Friday and “Reservoir Dogs” on Saturday.

Chicago Drive-In hopes to open another site to be determined in Chicago.

That may be be closer to home for Ray Narrajos, wife Sarah, and son Joseph, who drove in from Chicago’s Bridgeport neighborhood. They bought wings and a half Hawaiian/half sausage pizza from X’s & O’s in Bridgeview to enjoy as they awaited the movie.

“The lack of distraction is nice,” Sarah said of going to the movies. “We’re excited to be at the first one here … This is super cool.”

Alicia Puckett, of Maryland, home for a family funeral, said “the community needs something like this.” 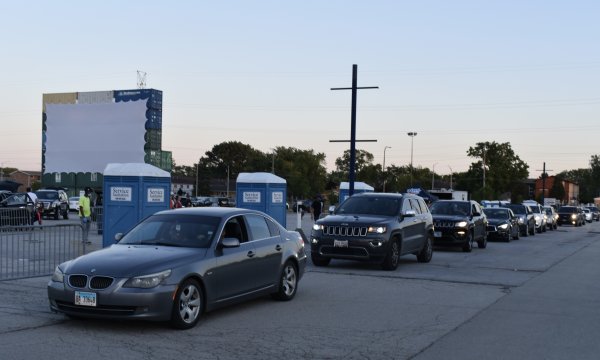 A long line of vehicles pulls into the parking lot of SeatGeek Stadium for the first movie night. Photo by Steve Metsch.

In Bridgeview, the movie screen is on a huge structure created by using cranes to stack 27 storage containers.

Each of the six containers on the base had 33,000 pounds of concrete inside to act as ballast to support the towering structure, Mendicino said.

Chicago Drive-In plans on showing movies every night of the week. To hear the movie, you simply tune in 88.1 FM, he said.

Yes, you can bring your own food and beverages.

“We’d like to sell some concessions,” Mendicino said. “Maybe don’t overload your car. Buy a candy bar if you can. We have popcorn. We’ll have food trucks coming in here soon.”

Asked how much the project cost, Mendicino smiled.

“It’s not cheap, and that’s why we hope people buy a couple candy bars from time to time,” he said. “Licensing, insurance, crane service, staff. This was not inexpensive.”

With that, he asked if he could smoke. “First-show jitters. Opening night,” he said as he lit a cigarette

You can watch a time-lapse film of the construction on Chicago Drive-In’s Facebook page, he said.

The day after, Mendicino said he was pleased: “It went smoothly and everybody had a lot of fun.”

Asked if any fine tuning was needed, he said: “I think we went a little overkill on the bleach in the Porta Pottys.”

“We’ve got to tone that down a little bit,” he said. “Safer is better, I guess, but that’s a bit of a learning curve with this Covid. Other than that, we’re pretty good.”