After 10 seasons as the head football coach for Lyons Township High School, Kurt Weinberg has resigned.

The move comes after one of the most dismal seasons in school history.
Lyons was winless in five home games, was shut out twice, never scored more than 14 points in a game, and finished 1-8. Lyons missed the playoffs for the first time with Weinberg as head coach.

Weinberg said Friday the 1-8 record did not factor into his decision. “That’s baloney,” he said when asked if he had been forced out.

“I had LT’s full support to continue,” he said, adding that he and his wife discussed his resigning before the season began.

“The decision was 100 percent mine. My kids are of the age that I am missing all of their stuff. I’ve never seen a Senior Night, or been to a homecoming game. It’s time,” Weinberg said.

Lyons Township Athletic Director John Grundke, before Friday night’s home basketball game against Hinsdale Central, said the administration did not ask for Weinberg’s resignation.
“No pressure. This was his decision. He lives up north. He wants more time with his family,” Grundke said.
Lyons has posted the head football coach job opening, he said.
“And we’ve already heard from some applicants,” Grundke said. “The search is in the process. We want to pair up the coaching job with a teaching job here.”

Weinberg and his wife have four children. The youngest is entering high school in 2019. The family lives in a northern suburb. 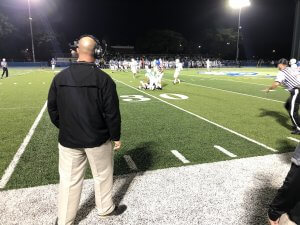 “This year was tough. We had a lot of injuries. We lost J.J. (starting quarterback J.J. Dutton) and our two best linemen,” Weinberg said.

Unable to throw, Dutton still starred as a defensive back with one hand in a cast.

Lyons had trouble scoring and stopping other teams. The Lions scored 63 points in nine games while allowing 286. The defense allowed 24 or more points in eight games.

“We struggled on either side of the ball to match up with people. It was very difficult to stop them, and very difficult for us to score. When you combine those, it’s pretty rough,” Weinberg said.

Looking back, Lyons enjoyed some great success under Weinberg, nine straight playoff years and advancing to the state quarterfinals in 2010, 2011 and 2012. The team was a school-record 10-2 in 2010.

Weinberg though his 2012 team which lost to Mount Carmel after a 10-10 halftime score “was probably the most talented and could have won state. At halftime, I would have bet money we’d win that game.”

While this season was frustrating, he said the Lions never quit on him.

“Sometimes the bones don’t roll in your direction. But our kids fought hard until the end. Even the last game at Oak Park, they were locked in, playing hard,” he said.

Weinberg coached many outstanding players like wideout Matthew Harris, who played defensive back at Northwestern; quarterback Ben Bryant, who just finished his freshman year at the University of Cincinnati; and Philadelphia Eagles kicker Jake Elliott.

Elliott’s booming kicks led him to the University of Memphis, where he set school records. He was drafted by Cincinnati, cut, and eventually joined the  Philadelphia Eagles whom he helped win the Super Bowl over New England last February during his rookie season.

How he became a kicker will live forever in LT lore.

“You know the term ‘living the dream’? That could be the title of a book about Jake,” Weinberg said.

Weinberg discovered Elliott, then on the LT tennis team, at a pep rally when he was randomly selected to attempt a field goal.

“You could hear the ball coming off his foot. Once you saw and heard that, you could tell he was pretty dang special,” Weinberg said.

Weinberg, who is recovering from Dec. 13 hip replacement surgery, remains freshman lacrosse coach at LT where he is a PE teacher. In a few years, he thinks he “may be interested in being an assistant football coach.”

Coronavirus, one year and too many deaths later Blogger