Organizers are pleased with participation, results

The reviews are favorable for the first-ever virtual Pet Parade in La Grange.

Molly Price, event coordinator for Pet Parade Charities, the non-profit which sponsors the parade, said Monday that “everybody was really supportive of it.”

Fears of spreading the coronavirus in a large crowd like the one the parade draws each year forced organizers to make it a virtual parade.

Families, schools, business and others submitted short videos that were pieced together. 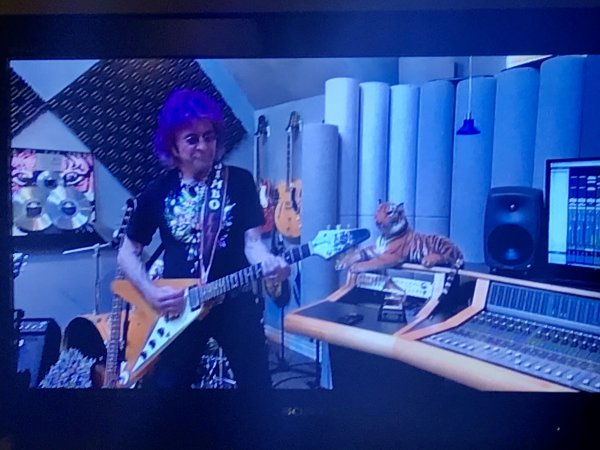 Rocker Jim Peterik, who grew up in Berwyn, submitted a video of himself playing “Eye of the Tiger” for the virtual Pet Parade. Peterik, of Burr Ridge, was the grand marshal of the parade normally held on the streets of downtown La Grange. Photo by Steve Metsch.

It was broadcast over the weekend on Comcast Cable Channel 6, AT&T Channel 99, and www.utube.com/LTTVonline. You can probably still find it on those, or Google it.

“It was well-received,” Price said. “We got some coverage on the news, ABC-7, WGN, NBC. I got a lot of positive feedback that it was memorable even with the circumstances.”

Marty Dunne, a real estate broker for @ properties in Western Springs, teamed with US-99 on-air personality Drew Walker for the second straight year to provide amusing color commentary of the parade.

Speaking of songs, rocker Jim Peterik, the parade’s purple-haired grand marshal, sent a video of himself singing his hit song “Eye of the Tiger” while jamming on his electric guitar in his home studio.

There was also a montage of appearances by the Shriners, either on their little cars or flying carpets, dating back to 1984.

“I loved the Jesse White Tumblers montage, of course, because they’re a fan favorite,” Price said. “And I loved the Lawn Rangers. I loved that we included them.”

The Lawn Rangers based in downstate Arcola feature men pushing lawn mowers and tossing brooms to each other in a funny choreographed performance.

Archived footage was shown. So was a segment featuring local Lawn Rangers who were filmed in the parking lot at the north campus of LTHS.

Being the Pet Parade, there were dozens of videos featuring families with their pets, be they dogs, cats, birds, fish and even a horse.

“I just loved that the community sent in the videos. I had people e-mailing me and texting me and uploading them. It was really nice to see the support,” Price said.

One of the most creative segments featured a man and a woman from the La Grange Area Historical Society.

Clever editing showed them dressed in various costumes that represented the Pet Parade through the decades, dating back to the first one held in 1947.

Price thanked Bill Allan, the advisor for LTTV, the student-run TV station of Lyons Township High School, who was in charge of piecing together 180 clips.

“He helped make it all go smoothly,” Price said.

She called the experience “a learning curve.”

“I was used to a live event, not used to dealing with video downloading,” she said. “It’s good to learn all these skills.”

Price thinks the experience will help organizers “the process go more smoothly if it has to be virtual again, but I really hope it wouldn’t.”