Thanks to the donations of countless people, Oliver Canales will be remembered for a long time at Lyle Elementary School in Bridgeview.

Their donations were not the monetary kind. They were simple plastic caps found on bottles and jars.

The goal of organizers was to raise some 400 pounds of the caps, which they will deliver in about 20 huge plastic bags to Green Tree Plastics, in Evansville, Ind. They surpassed that goal by about 20 pounds on Monday.

In return, the recycler will use all of those plastic caps to build a bench starring one of Oliver’s heroes, Batman.

They’re going to build a bench in the memory of Oliver, a 10-year-old boy who died of leukemia in July, shortly after he finished the fifth grade.

Lyle Principal Nuray Kavustuk fondly recalls Oliver, as do the teachers and students.

“They developed a connection with him. They’ve been on the journey with his family for quite a while,” Kavustuk said.

“We did ‘Pennies for Pasta’ for leukemia (research) for years. When Oliver passed away, we wanted to do something special in his honor. His mom gave us the final go ahead on the bench,” Kavustuk said. 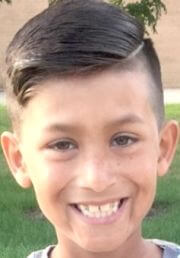 Oliver Canales was 10 when he passed away last July. He was a huge Batman fan. Supplied photo

Oliver’s mother, Rebecca Komosa, is impressed with the donations that have rolled in from so many people, most of whom she does not know.

The school had a long list of the caps that were acceptable. They included caps from toothpaste, spray paint, soft drinks, butter containers, coffee cans, yogurt, detergent and milk, to name a few items.

Oliver “loved Batman,” his mom said, “so now when see Batman, we think of my son.”

Oliver was “a very spirited kid, strong, brave, only 10 years old but someone who’s been through so much and was wise beyond his years.”

She recalled Oliver as a fun-loving kid who loved his family and “just loved life, and who lived it to the fullest to the very end.”

Kavustuk said she never heard Oliver complain about his health. His mom was not surprised.

“Nobody ever knew (about his leukemia) unless they heard it through a teacher. For him, he’d go to school like it was any other day,” his mother said.

Oliver was diagnosed with leukemia when he was 3 “and fought it with everything he had until he was almost 11 years old,” Komosa said.

Oliver, who would’ve been 11 in August, was the youngest of three siblings.

That’s why the Batman bench, a dedicated reminder of Oliver, will be treasured for years., she said.