Four have a combined 111 years service

The Lyons Village Board honored four employees with plaques recognizing their longtime service. The four have a combined 111 years working for the village.

Rich Vabro has worked 30 years with the water department, is the foreman.

Vabro “is very vital to our community,” Mayor Christopher Getty said at the Sept. 18 board meeting.

“Every time you go to turn on the water, it flows out like magic,” Getty said. “It’s not a simple process. There’s a lot of time, work and energy that goes into it, and most of it is underground.”

Vabro shrugged off the praise, saying, “it’s a team effort.” 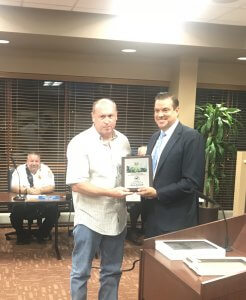 Mayor Christopher Getty presents Steve Karasek with a plaque for his 35 years with public works. Photo by Steve Metsch.

Steve Karasek, 35 years with the village, “is a great asset to public works,” Getty said.

“We’ve called on him in any instances to lead that department. He’s our active, on-duty foreman. Steve does an excellent job. If you want something done right now, Steve will do it right now,” Getty said.

“Scott has a lot of experience. He’s all-around a good worker,” Getty said.

“Dave is on the sweeper most days. He’s very proficient in sweeping the streets, which is not as easy as it may seem when you’re driving a large vehicle on the opposite side of the road,” Gettty said.