So far, so good

Initial reports about students being back in Argo Community High School are encouraging, District 217 officials said at the latest meeting of the school board.

Students returned to the building on 63rd Street on Jan. 19. At the board meeting the next night, Jan. 20, reports were glowing about the students and the teachers.

Principal Brandon Cotter was pleased by what he saw on the first day back, which resulted in applause from board members.

“I’d say it went pretty well,” Cotter told the board.

“From a safety standpoint, there was nothing really significant. We have one-way hallways, small things moving forward. We had just under 300 in attendance and really high staff turnout.”

“We working out the kinks,” Cotter said.

Students are in school on Mondays and Tuesdays if their names begin with A to L. And those who are M to Z are in the building Thursday and Friday. Due to weather concerns, all students had remote learning on Tuesday, Jan, 26.

An eighth-grade parent night set for Jan. 27 was not going to be a live, event. Instead it was a “more on-demand type thing so parents if they are at work can go in and watch it later,” Cotter said. 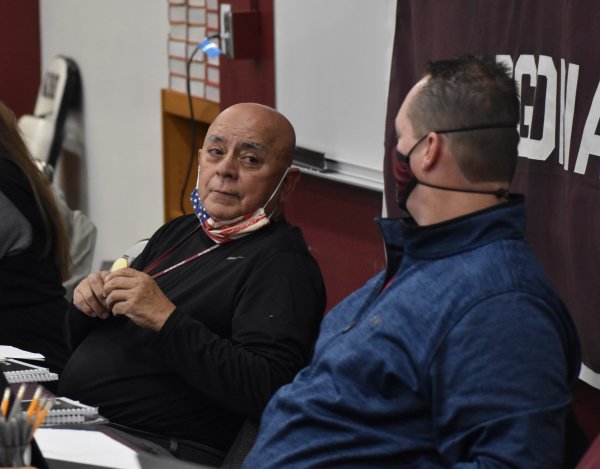 Board member William Parra (left) chats with board president Dan Kozal during the meeting. Photo by Steve Metsch.

During the public portion of the meeting, Gabriel Torres, a member of the 2008 graduating class, expressed great concern for the safety of students and teachers with the building re-opened for classes. “I’m here to ask the board to direct Supt. Toulius to return the school to remote learning immediately (because infection rates are not low enough),” Torres said.

“In Summit yesterday (the infection rate) was 11.54 percent and in neighboring Justice it was even higher at 13.11 percent,” Torres said.

While he approved of the addition of cleaning equipment, like the 134 air purifiers that use UVC light and are classrooms as noted by Business Director Joe Murphy, Torres said the district put pressure on teachers with the decision to re-open.

Kozal said some people may have mixed emotions about re-opening, but added, “we opened up the school to the families and kids who want to come back.”

“The families that have concerns and like to stay at home, they’re free to stay home,” Kozal said.

Each teacher can use Zoom to teach from home, “and we spent money for cameras in the room,” Kozal said.

“Every classroom is equipped with that,” he said. “If they want to stay home for concerns, they can stay home and Zoom.”

There’s nothing new to report in ongoing teacher contract negotiations, with the teacher union, Kozal added before the board went into executive session.