No problems reported as hundreds march

Charlotte Wolf said she wanted to make a stand “because there is a lot going on in the world right now.”

So, the recent graduate of Lyons Township High School organized a peaceful protest rally and march in La Grange on June 3 in the aftermath of George Floyd’s death.

Floyd is the man who died in Minnesota on May 25 after now former police officer Derek Chauvin kneeled on Floyd’s neck for nine minutes.

Chauvin has been charged with second-degree murder. Three fellow former officers were charged with aiding and abetting.

Floyd’s death resulted in protests, some turned violent with looting, in hundreds of US cities including Chicago, Naperville and other suburbs. The La Grange event went off without a hitch. Another was planned by different organizers for today, June 6. 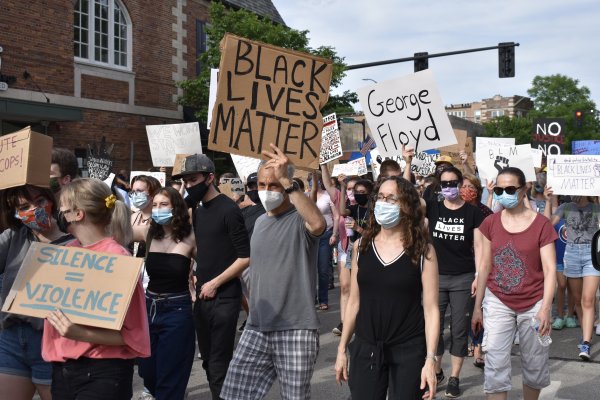 Protesters march west on Harris from La Grange Road during the rally on June 3. Photo by Steve Metsch.

Wolf said she “wanted to make sure the suburbs were in solidarity with what’s happening in the city.”

“It’s time for white people to come out and say that we are there and we see them and we want to change the systematic racism that is happening, and that we want to support police reform,” Wolf, 18, of La Grange said.

Most of the crowd was white and in their 20s or teens. Wolf urged them to be vocal.

The group gathered outside the La Grange Village Hall and then marched west on Harris, north on Ashland and west on Burlington to the Stone Avenue Metra Station. Some kept marching south on Brainard Avenue from there.

The village said an estimated 250 gathered to hear from inspirational speakers and to march peacefully. Others thought there were more.

Among those who came out was Andrew Pesch, 19, who rode his bike from neighboring Brookfield on a warm sunny day to “to support George Floyd, who was pretty much murdered by four people in cold blood.”

“I just want to be here to voice my opinion, support the African-American community and try to fix police brutality,” Pesh said. “I know one protest is not going to do all of that. But it’s a step in the right direction.

“I’m here to show my support … and make sure the future of America is here to set a good path,” Lipchik said.

It wasn’t just for young people.

Pat Cole, 67, of Brookfield, said “we want to stand with all American citizens who don’t want to live in a country that tolerates violence vs. peaceful protesters.”

She and husband Jon Platt, 69, said they were sickened by the way Floyd died. “Completely inhumane,” Cole said.

“Too many black men, black women and children have been killed and it’s got to stop,” Cole said.

Platt said it’s “simply people asking for equal rights, including the right to walk down the street without being killed for the heck of it.”

Lena McDuffie, 65, is an African-American woman who moved from Louisiana to La Grange 48 years ago.

“I think it’s much needed,” McDuffie said of the protest march. “As long as we stay peaceful, and there’s no destruction of public property (or) people’s businesses, I’m all for it.”

McDuffie said violent protests in Chicago “are just not needed.”

“I love peace. And I love unity. The whole works,” McDuffie said.

During the really, speakers discussed need for change when it comes to the police and race relations.

After asking “when will enough be enough,” the Rev. Maurice McGee, CEO of Caring Place Foundation, said “today, all we are saying is we have had enough.”

Several speakers urged people to invite those of other colors to a meal, and asked them to hold friends and family accountable for racist things they may say.

Using a bullhorn, Samantha Taylor, 16, of Brookfield, said she was “called the n-word and given dirty looks” when she first walked the halls of Lyons Township High School.

“I know what it’s like to feel invisible,” Taylor told the crowd.

La Grange police, who were stationed along the route, reported no problems. They closed La Grange Road between Harris and Cossitt to ensure safety for the large crowd.

Standing on La Grange Road at edge of the crowd was businessman Steve Palmer. He and brother Phil own Palmer Place, a popular tavern/restaurant/beer garden located across the street from the village hall.

“These young people wanted to organize and speak out,” Palmer said.

The next day, Wolf said she was “very happy with the outcome.”

“The amount of people who showed up was really inspiring,” Wolf said. “The march was peaceful yet still disruptive to get the message across.”

She though the crowd was larger “especially since people kept joining as we walked …. I’d say it reached up to 400.”

She was surprised by the number of adults who joined in.

“We really did show the suburbs are supporting the city and the movement in general,” Wolf said. “I think we also proved that white people are here to help the Black Lives Matter movement, and a lot of people are finally waking up and wanting change, which is an awesome thing.”