Say $75 annual inspection fee per unit is too steep

Several landlords spoke out calling the fee unfair and hard to pay during the coronavirus pandemic.

Lisa Romero said the family is wondering about the timing of the inspection fee, calling it “weird” and “not considerate.”

Mayor Sergio Rodriguez said the fee was approved by the board in January. Implementation was delayed for four months after the coronavirus pandemic hit hard In March.

Lisa Romero and her father got into a sometime heated discussion with trustees Mayra Ortiz and Sam Dardovski during the meeting.

“This is a way for our village to get in and hold a landlord responsible for that property and maintaining it,” Ortiz said. 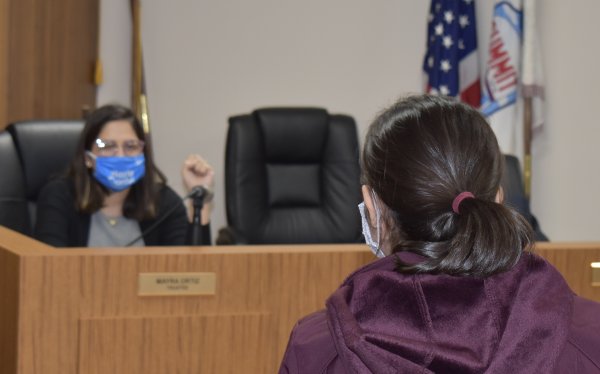 Lisa Romero (right) talks with Summit Village Trustee Mayra Ortiz about safety inspection fees. Romero’s father owns 20 apartments and, at $75 per unit, would pay $1,500 each year for the safety inspections. Officials said the price may be tweaked. Photo by Steve Metsch.

Dardovski said the inspections are needed to prevent potential tragedies: “Everyone knows there are people living in certain buildings in this community that are not apartments.”

The inspections are brief walk throughs that check for smoke and CO2 detectors, hot water, two exits, and other safety measures, village officials said. A private company is paid $75 per inspection.

The fee is per unit once a year, so the owner of 10-units, for example, would have to pay $750. Several landlords said the fees are too high.

“We want to know where the money is going to go,” Lisa Romero said.

“We aren’t taking money from this,” Dardovski said.

But he and Rodriguez said the village will take another look at the inspection fees.

“We can change anything,” Dardovski said after the meeting.

Frank Romero questioned why inspection fees were needed in Summit.

“Every community has it,” Dardovski said. “Bridgeview has it. Oak Lawn has it. Oak Park has it. Every town has it.”

Lisa Romero said Summit can’t be compared to those towns.

One landlord suggested that the fee be picked up by the village if no violations are found, and by the landlord if things “are not in order.”

That’s an idea worth considering when the fee is reviewed, Ortiz said.

“Landlords who are putting lives at risk are getting richer,” Ortiz said. “Not the residents. Not us. The landlord is. … We’re trying to protect you guys.”

After the meeting, Ortiz took it a step further: “I hate to say this, but it’s the slumlords that are complaining.”

After the meeting, Rodriguez said he knows that nobody wants to pay extra fees.

‘But when you look at what the overall goal is, it outweighs the minimum fee,” the mayor said. “You go out to eat some place, you’re spending $75.”

The next village board meeting is on Oct. 19.